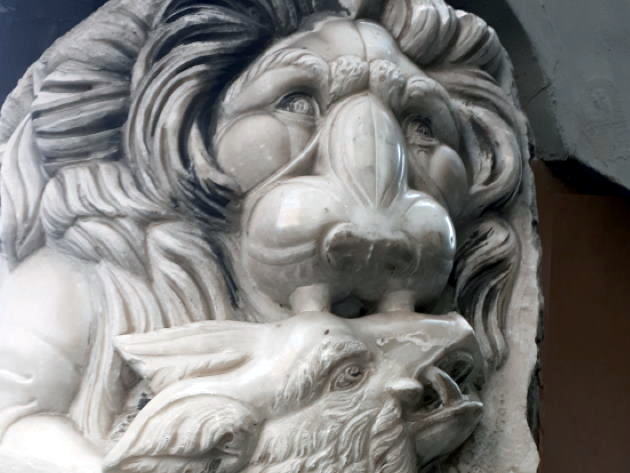 Some believe the only star of Rome is the Capitoline She-wolf but in the animal pantheon of the city there are many competing for the scene, each in their own way witnessing that age-old relationship that links humans to animals. Quadrupeds, birds, insects, fish and snakes, domestic, courtyard, wild and exotic animals, faithfully represented or with all the imagination that goes with it: an amazing zoo to be discovered by strolling, even virtually, through the streets and alleys of the historic center. Sometimes they stare at us unperturbed from monuments, churches and fountains, but often they hide on street signs, surrounded by a mysterious, intriguing or irreverent aura...

Read on to find out more about seven streets named after the “bestial” universe, travelling back in time in the company of the historical animal populations and following their tracks among coats of arms, ancient sculptures and inn signs.

#1 Via and Piazza del Biscione - The name of the street and of the small square a few steps away from Campo de’ Fiori is attested since the 15th century, but its origin is as often happens uncertain: some link it to the heraldic symbol of the Visconti Northern Italian dynasty (depicting a “biscione”, a large grass snake) exhibited by the Milanese owners of a tavern; others claim it comes from the eel (the “anguilla” familiarly called “biscia”) that the Orsini family had added to their coat of arms once they became lords of Anguillara. The powerful Roman family owned several houses and turrets in this area, including the majestic palace – built over the ruins of the Pompey’s Theater – which now dominates the square with its 17th-century façade. Named after the “biscione” is also the narrow passageway that joined and joins the square with Via di Grotta Pinta: here, at some stage, an image of the Virgin had been placed. Like other street icons, in July 1796 the Madonna was purportedly seen moving its eyes, a miracle that drew people from all over the city. But the effigy’s hidden location in the maze of the city’s alleys complicated the quest. Hence, apparently, the popular Roman saying “looking for Mary around Rome”, more or less the equivalent of the proverbial needle in a haystack.

#2 Via del Pozzo delle Cornacchie - Crows and hoodies played a major role in Greek and Roman mythology and fables, but they were also prominent features within Celtic folklore, remaining a key presence in Anglo-Saxon culture. According to the most accredited version, the name of this small street close to the church of San Luigi dei Francesi has an unsuspected link with Great Britain. Let’s go back to the year 1515: Pope Leo X appoints Almoner of King Henry VIII, Thomas Wolsey, as Cardinal titular of Santa Cecilia in Trastevere. The powerful English prelate thus decides to have a palace built in Rome, also equipped with a fountain in the shape of a well, decorated with his coat of arms. Which contained, among other things, a rose between two black-feathered birds – actually, Cornish choughs, but Roman people love simplifying things. Fallen into disgrace because of the king’s divorce affair, the cardinal died in Leicester in 1530 before he could visit Rome. There are no remains of the hooded crows on the well but the palace still exists: owned by the Aldobrandini family, in the second half of the 17th century it was bought by Cardinal Rondanini who also gave its name to the tiny square along the street, reputedly Rome’s smallest square.

#3 Via di Santo Stefano del Cacco - To find out which animal is hiding in this street, we have to go back to 43 BC: that is, when ancient Romans built in this area the first and most magnificent Egyptian temple, the so-called Iseum Campense, dedicated to the goddess Isis and her spouse Serapis. Almost nothing has survived of its structures but its remains were used to embellish squares, basilicas and museums, not only in Rome. The church of Santo Stefano (in Pinea, as it was originally called) from which the street takes its name incorporated part of the cell of the temple and in its vicinity there was a fragmented statue of the god Thot, represented as a baboon. People called it “macaco” or “macacco” (that is, macaque), a word inherited by Portuguese navigators who explored the African coasts: cacco would then be its popular corruption and the strange appellation was preserved even after the sculpture was brought to the Capitol in 1562, to then move on to the Vatican collections in 1838. The giant marble foot today at the beginning of the street also belonged to a statue of the Iseum: discovered in the 16th century, it was originally located in Via Piè di Marmo but it was moved in 1878 to make way for the funeral procession of King Victor Emanuel II.

#4 Via della Scrofa - In the 17th century, the elegant street we see today was at the center of a colorful and lively district, pretty loved by painters such as Antiveduto Gramatica, the Cavalier d’Arpino and the Sicilian Lorenzo Carli, who welcomed the young Caravaggio upon his arrival in Rome. The genius artist lived in these streets for around ten years, creating some of his greatest masterpieces, getting involved in brawls and partying in the district’s taverns and inns. According to many, the name of the street, which follows the directions of a Roman road probably built at the time of the construction of the Mausoleum of Augustus, comes from the sign of a famous inn: what is certain is that already in 1445 the whole area was known as “la Scrofa”, the Sow. Probably part of a larger ancient bas-relief with a procession, the small marble sculpture depicting a sow was perhaps only later applied to the wall of the Augustinian convent and then transformed into a fountain, with the addition of a marble basin, on request of Pope Gregory XIII around 1580. At the end of the 19th century, as traffic increased, the basin was moved to the corner with Via dei Portoghesi: the little sow remained instead in its place, to remind us of the street name.

#5 Via dell’Orso -  “The house of Marco Piccione is turned into the Orso hostaria”: we are in 1517 and the 15th-century building of a family of the Roman nobility has just been transformed into a hotel, the Albergo dell’Orso, which will host during its long life Rabelais and Montaigne, Gogol, Goethe and other illustrious people, alongside simple carriers and postilions. The nice street full of ancient buildings, which today can also be accessed by descending the staircase on one side of the Napoleonic Museum, was probably named after the hotel. Why the hotel was called this way is an open question: according to some, for its sign depicting two bears, or for the name of one of the managers, Baccio dell’Orso, or, again, for the two walled marble reliefs along the street (one of which was stolen and replaced in the seventies with a copy). However, it is difficult to imagine that in the two lions, with an antelope and a wild boar in the jaws, someone could have seen a bear ... From a certain point on, the street also became the kingdom of artisans and restorers: it was in one of its shops that Cardinal Joseph Fesch, Napoleon Bonaparte’s uncle, found the second part of a panel he already owned, recomposing Leonardo da Vinci’s “San Girolamo” today in the Vatican Pinacoteca.

#6 Salita di Montecavallo - A short road stretch continues along Via della Dataria allowing to reach the Quirinale from the lower part of the Trevi district. Rich residences, gardens, temples and public buildings populated the hill in Roman times: in their place, churches and towers began to sprout in the Middle Ages, while the ancient buildings were abandoned and their marbles reused for new constructions. Two marble giants over 5 meters high stood out among the ruins, used to adorn the Baths of Constantine and saved from burial and from any temptation to transport them elsewhere thanks to their size: “the horse tamers”, or the statues of Castor and Pollux we can still admire in the fountain in the center of the Quirinale square. More than the mythological twins, however, it was their prancing horses, barely held by the bridle, that represented a constant point of reference for the Romans, so much so that the whole area was named after them since the 9th century (“regio caballi marmorei”, region of the marble horses). Almost inevitably, the top of the Quirinale thus began to be called Monte Cavallo, or Hill of the Horses, a nickname adopted as the official name of Piazza del Quirinale until the end of the 19th century. Today, our small street reminds us of the past.

#7 Via Bocca di Leone - We all know the She-wolf is the emblem of Rome. Yet, until her arrival at the Capitol in 1471, another animal represented the image of the city: the lion, a symbol of power and justice, as well as guardian of sacred places. The lion thus took its share for centuries, appearing in banners, coins, coats of arms and various decorations – which reused sometimes ancient sculptures – and leaving more than a trace in the street names of the city. This is the case of our street, once populated by inns, hotels and workshops for the repair of carriages serving the nearby Piazza di Spagna and today full of boutiques and elegant shops. We do not know if its name derives from a Roman bas-relief, from the sign of some inn or, as a document would prove, from a manhole of the sewer of the “Fonte di Trejo” decorated with the jaws of a lion, following the example of the famous mask of the Mouth of Truth. Despite everything, the lions still inhabit the street: in front of the majestic Nuñez-Torlonia palace, the Roman sarcophagus that collects the water from the fountain built in 1842 by Antonio Sarti is supported by two mighty lion paws. Not to mention the rampant lions placed to protect the Torlonia coat of arms in the arch above it. 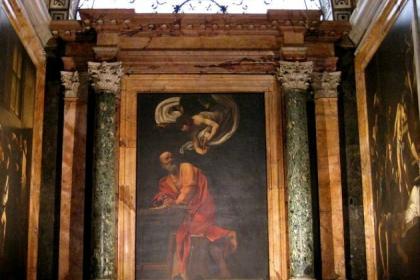 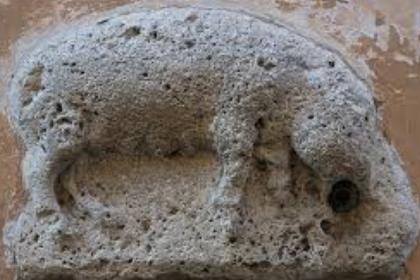 The small fountain in Via della Scrofa
Monuments