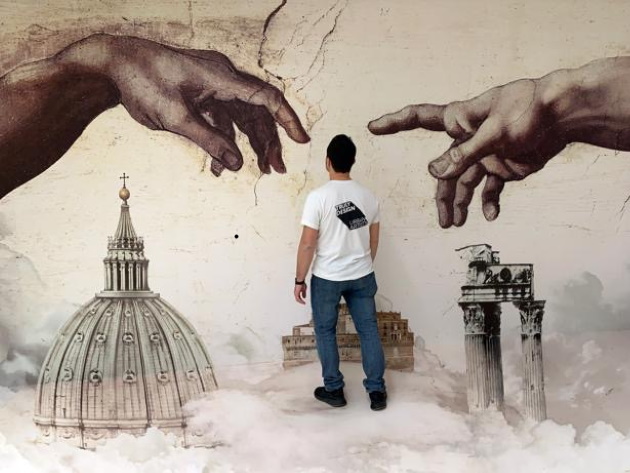 A new tribute to celebrate Leonardo da Vinci innovatively, right inside the airport that bears his name. In 2019, on the 500th anniversary of his death, Fiumicino Airport inaugurated an original and surprising collection of anamorphic installations in which passengers can “immerse themselves”.

It might seem a complicated word, but actually, the anamorphosis is nothing more than a distorted image which, seen from the right angle, “deceives the eye” and takes on a three-dimensional shape. It is a pictorial technique that boasts a long tradition (in Rome, a splendid example is the fake dome painted by Andrea Pozzo in the Church of Sant’Ignazio di Loyola): no wonder that, in addition to the pioneering studies on flight and flying machines, the first exercises in this field are to be attributed to Leonardo himself.

Created in collaboration with the collective Truly Urban Artists which combines the techniques and language of graffiti and street art, the new works are distributed around an international boarding area and one of the loading bridges used by international passengers to disembark. At the right moment, as soon as they enter the corridor at the end of the Loading Bridge E31, passengers will suddenly see, through an illusion of perspective and thanks to a play on colors, the drawing inspired by one of Leonardo’s most famous works, the Vetruvian Man. The two works in the International Boarding Area E focus on the beauty of Rome, representing the Colosseum and the frescos of the Creation of Adam in the Sistine Chapel.

All works are accompanied by an explanation in Italian, English, and Chinese, as well as a reference to the official hashtag #RomeAirports for sharing truly unique selfies and photoshoots on Instagram, Facebook, and on Chinese social media WeChat. 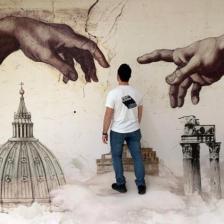