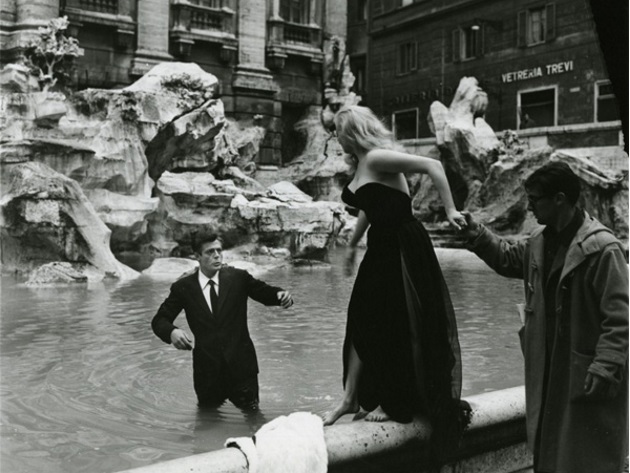 Between the end of the 1950s and the early 1960s, Italy experienced its miracle, the economic boom was at its peak. Radio and television enter the homes of Italians, while cars, Vespas and Lambrettas modify their rhythms and habits. Fiat 500, Fiat 600 and Giulietta become the status symbol of an era.
Luxury and glamour are the distinctive features of this golden age: clothes from the biggest fashion houses, along with priceless jewels, embellish the outfits of the international jet set ladies.

Rome bursts with zest for life, beauty and entertainment, becoming the "Hollywood on the Tiber": in the Cinecittà Studios, in addition to Italian films, the overseas blockbusters are filmed, because the costs are more advantageous than in the US, while the wide Via Vittorio Veneto, with its cafes and luxury hotels, becomes the “living room” of the world and the place where celebrities meet.

A new lifestyle is born: that of the new rich, of the artists, of the directors, of the actors and, above all, of the pushy free-lance photographers, undisputed icons of that Rome which, after the release of Federico Fellini's film "La Dolce Vita", will be called “paparazzi”, a word that has entered the collective imagination and is now commonly used.

Rino Barillari, Tazio Secchiaroli, Marcello Geppetti and their colleagues were real assault photographers in search of the cover scoop: they revealed to the public the overwhelming passion between Liz Taylor and Richard Burton, both married, the turbulent one between the Italian actor Walter Chiari and the wonderful American diva Ava Gardner and  tried to capture a shot of the famous playboys of the time, Gigi Rizzi and Pier Luigi Torri, with the most fascinating and courted stars.

One of the most relevant facts, as it aroused a huge scandal and even judicial consequences, were the stolen photos of the well-known improvised strip-tease by the Turkish-Armenian dancer Aïché Nana, symbol of those years and a source of inspiration for a famous scene of La Dolce Vita by Federico Fellini.

A film that marked an era, La Dolce Vita (1960) is the bittersweet portrait of this period and a fresco of the various socio-economic realities that coexist in the Capital. The main character, Marcello, is an aspirant writer, played by the beautiful Marcello Mastroianni, who works for a tabloid newspaper and every night stands in front of the Via Veneto nightclubs in search of gossip or trying to steal a shot of the high-society celebrities. The unforgettable Trevi Fountain bath scene by the prosperous Anita Ekberg, who plays Sylvia, an American diva who came to Rome to shoot a film, is an indelible testimony to experiencing life in all its disruptive force.

Even the lively Roman intellectual circles do not disdain social life: parties, exhibitions, lounges, terraces and rooms of the historic centre, such as those in Piazza del Popolo, are the favourite hangouts for artists, philosophers and writers, including Alberto Moravia, Pier Paolo Pasolini, Alberto Arbasino, Goffredo Parise, the “Poeti Novissimi” presenting the artists through their poems, the Gruppo 63, "neo-avant-garde" writers, such as Nanni Balestrini and Umberto Eco, journalists and writers like Ennio Flaiano, Vittorio Veltroni and Lello Bersani, while in the nearby art galleries, artists like Renato Guttuso, Mario Schifano, Tano Festa, Franco Angeli and Giosetta Fioroni displayed their paintings.

From then onwards, the expression "Dolce Vita" continues to evoke a light-hearted lifestyle consecrated to worldly pleasures entering the vocabulary worldwide.

Lady Gaga, the famous and eclectic Italian-American singer-songwriter, dedicated her song Paparazzi to the photographers of the time.