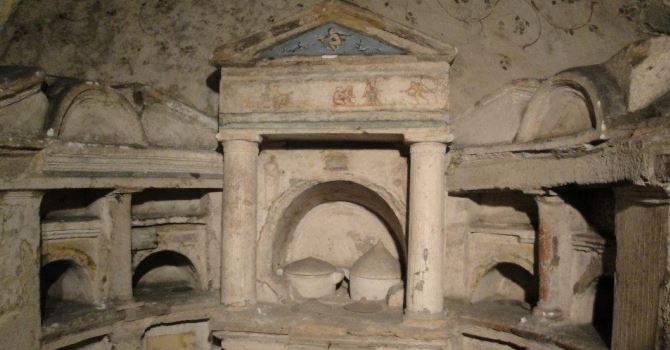 The term columbarium refers to a burial chamber which walls are covered with rows of niches in which cinerary urns, small clay pots containing the ashes of the deceased, were placed.
The term colombarium gets its origins from the similarity of this type of tomb with dovecotes.

The columbarium of Pomponio Hylas, discovered in 1831 and located in the Via Latina park, is very important for the exceptional state of its preservation.

On the wall opposite the stairway, there is a mosaic with an inscription (dating back to the Flavian era, 69-96 AD), which contains the names of both spouses, Pomponio Hylas and his wife, whose ashes were contained in two cinerary urns.

The columbarium continued to be in use until the second century AD, as is evidenced by an urn with an inscription dedicated to Emperor Antoninus Pius’ freedmen, which is now in the Capitoline Museums.

A sarcophagus with the body of a woman perfectly preserved was also found under the floor but it turned into dust immediately upon being discovered.

Closed: Monday, January 1, May 1, December 25
Open to organized groups by reservation only
Max 7 people per group