Safe beaches: Seapass, the web App to manage entrances, is back again this year | Turismo Roma
Skip to main content

Safe beaches: Seapass, the web App to manage entrances, is back again this year The Seapass - Il Mare di Roma real-time App for mobile phones and tablets allows you to experience the sea safely and without stress, avoid queues and gatherings at the access gates or unnecessary movements on the city coast, in compliance with national or regional regulations.

Given the persistence of the health emergency, measures and precautions are also planned. They involve control of the entrances to the shoreline, the maintenance of interpersonal distances, the prohibition of gatherings, and the possible contingency of presences on the beach, up to a defined maximum capacity.

The public beaches on the Roman coast are divided into 3 sectors; Ostia Centro, Ostia Levante, Ostia Ponente. Each area contains several beaches, which can be accessed from gates guarded by an operator, who controls the people entering and leaving by entering the data on a palmtop.

The web app service is active for all 21 access gates to the beaches of Rome Capital:

The 2021 bathing season for Roman beaches started on 15 May and ends on 30 September. 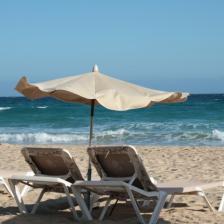