Gaia, Jerram's installation that reproduces the Earth seen from the Moon 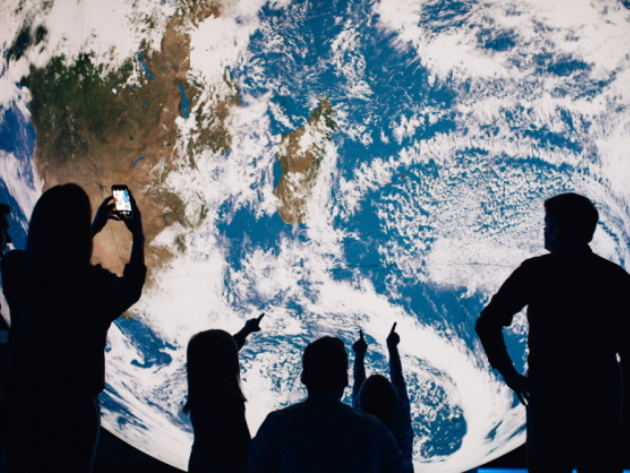 At the Piazza Centrale of the Mattatoio, Gaia is going to lie at the heart of a debate for a few days, a mirror of the major events of society and witness to a new perspective: seeing our planet "from space" makes it an unbelievably beautiful object, an object as valuable as it is fragile.

In Greek mythology Gaia was the personification of the Earth. Jerram's Gaia is a faithful reproduction of the planet seen from the moon. Measuring seven metres in diameter, its surface was created by combining detailed high-definition NASA imagery.

The work imbues the audience with a deep understanding of the way in which all life on earth is interconnected and with a renewed sense of responsibility in caring for the environment, but also with a perception of our planet's fragility.

Throughout mankind's existence we have always gazed at the moon and projected our hopes, dreams and desires onto it, but it was only with NASA's Earthrise photograph published in 1968 that we were able to see the blue planet floating in the darkness of space for the very first time.

Gaia - which has been displayed in leading museums and research centres throughout the world, as well as in public spaces and at international festivals – was created in collaboration with the Natural Environment Research Council (NERC), Bluedot and the UK Association for Science and Discovery Centers. The images for the work of art were chosen from NASA's Visible Earth series. The installation is accompanied by a soundtrack written by BAFTA award winner Dan Jones.

Luke Jerram's multidisciplinary practice involves the creation of sculptures, installations and live arts projects. Living in the UK but working internationally since 1997, Jerram has created a number of often large-scale art projects which have excited and inspired people around the globe. His work may be found in the permanent collections of such leading museums as the Metropolitan Museum of Art in New York and the Wellcome Collection in London. He was made a Fellow of the Astronomical Society in 2019 and received an honorary degree from the University of Bristol in 2020. His work Museum of the Moon has been displayed in 30 different countries and has been seen by over 10 million people.