Stories of esoteric and symbolic Rome 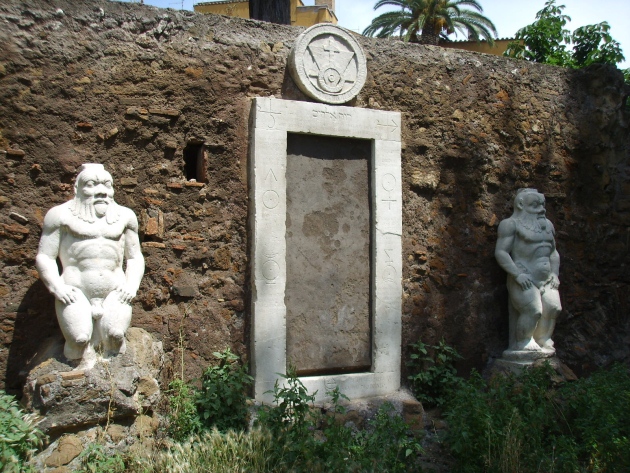 Among the squares, monuments and alleys of the Eternal City are hidden legends, traditions and stories that tell of a magical and mysterious city.

Did you know that in Rome you can open a magic door, look at the devil's chair, try to decipher the symbols in a basilica, eat snails against the witches or recall the goddess Isis? Let's discover the fascinating places that, united by the common thread of esotericism, show us the hidden soul of the capital.

If you are passionate about puzzles, the Basilica of Santa Maria Maggiore is the right place for you. Inside, it houses a mysterious square containing five words: Sator, Arepo, Tenet, Opera, Rotas. Do you notice anything strange? The sentence can be read in any direction, left-to-right, right-to-left, top-to-bottom or bottom-to-top. Widespread in various areas of Europe, the magical and ancient Sator Square is curiously present also in the basements of the splendid church already famous for the miracle of the snow.

Nearby, in Piazza Vittorio Emanuele II, there is a magic door now walled up, all that remains of the 17th-century Villa Palombara, built by the Marquis Oddo Savelli of Palombara. The villa was inherited by his son Massimiliano, a well-read man and alchemy lover who set up a laboratory for his experiments. According to legend, a traveller, probably the alchemist doctor Francesco Borri, was housed in the villa during a stormy night in 1680. Entering the gardens, the man began searching for a mysterious herb that could produce gold. The next morning, there was no sign of him, just specks of gold and some enigmatic manuscripts full of symbols. The Marquis had all the formulas, which apparently contained the secret of the philosopher's stone, engraved on the "alchemic gate". Guarded by two statues of the Egyptian god Bes, triangles, symbols of planets, Hebrew and Latin inscriptions are still there, waiting for someone to reveal the arcane.

Not far away, you can reach the Basilica of Santa Croce in Gerusalemme, mysteriously linked with the fate of Gerberto D'Aurillac, who became pope in 999 with the name of Sylvester II. A man of extraordinary knowledge, he was known as the "Wizard Pope" and was one of the most controversial figures in the history of Rome. According to Legend, he became so powerful, thanks to the favours of the devil. It is said that he owned a magic book and built a golden mask able to answer his questions, inside which he had trapped a demon. When he asked the mask about the circumstances of his future death, it would have replied: "You will die by officiating mass in Jerusalem". On 12 May 1003, the pontiff died while celebrating mass in Santa Croce in Gerusalemme and was buried in the nearby Basilica of San Giovanni in Laterano. Coincidence? However, Sylvester II did not cease to surprise. On the occasion of the opening of his tomb, 645 years later, his body was found intact, dissolving in contact with the air and disappearing in a cloud of dust. Only a silver cross and the papal ring remained. Even today, it is said that when a pope dies, a trickle of water comes off his tomb.

In the area of ​​San Giovanni in Laterano, the sacred and the profane met for centuries. Did you know that, in Rome, the feast of 24 June dedicated to Saint John is also called "Night of the witches"?
According to tradition, during the night of the eve, the witches went around the city in search of souls. Thus, people from all the neighbourhoods, by the light of torches and lanterns, used to meet on the lawns of San Giovanni for praying, drinking, making noise with tambourines, trumpets and cowbells and, above all, eating snails in taverns and barracks. Eating snails, whose horns represented discord and concern, meant, removing negativity. The feast ended only at dawn when the Pope went to the Lateran to celebrate mass and, immediately afterwards, to throw gold and silver coins from the loggia of the basilica. The superstitious can go in search of a good plate of snails in a traditional restaurant in the surroundings...

Next to the basilica, there is one of the places with the most relics in the world. Some sacred remains have disappeared, others are closed in silver pointed tabernacles, others are kept elsewhere.
We are talking about the Sancta Sanctorum, which is accessed from the Scala Santa (Holy Stairs). According to tradition, these stairs are the same climbed by Jesus in the palace of Pontius Pilate in Jerusalem in the days of his trial and sent to Rome by Saint Helena. "Non est in toto orbe sanctior locus" meaning "There is no holier place in the world" says the inscription on the altar, on which is the acheiropoietos image (not painted by human hand) of Christ. One of the legends tells that Mary asked the apostle Luke for a portrait of Christ. The future evangelist did not have time to start that he found the image already painted on the canvas, apparently by the hands of the angels. It is also said that the patriarch of Constantinople, to save the work from iconoclastic persecutions, threw it into the sea. From there, it arrived on the banks of the Tiber and was collected by Pope Gregory II, warned by a premonitory dream. Covered with a silver layer during the 13th century, the miraculous relic, whose face painted on a silk cloth is visible, is one of the most enigmatic and venerated icons in the history of the city. In the past, it was carried in procession as a talisman even by the popes. Who painted it?

On the Colle degli Ortuli, where the Basilica of Santa Maria del Popolo stands, there is one of the most mysterious places in the city: the tomb of Nero, the suicide dead emperor, whose ashes were buried in a porphyry urn under a walnut tree. Legend has it that the walnut tree, perpetually hovered by crows, was a usual meeting place for some demons, witches, and necromancers. In 1099, following a dream in which the Virgin appeared to him, Pope Pasquale II, particularly superstitious, decided to intervene, because the place was infested with ghosts. The pontiff had the secular tree cut down, scattered the emperor's ashes in the Tiber and built a chapel on the spot where the Domizi Tomb was located. Approaching the main altar of Santa Maria del Popolo and looking up, the most curious can admire the bas-reliefs under the vault that recall the mysterious story.

In the heart of the historic centre, you can discover the testimonies of the oldest and most majestic Egyptian temple in Rome: the Iseo Campense at Campo Marzio, dedicated to Isis, "goddess of a thousand names" and Egyptian divinity of magic, fertility and motherhood. From the first century BC, after the conquest of Egypt by Rome, the charm of the exotic country and the cult of Isis overwhelmingly conquered the capital of the empire, adorned with obelisks, hieroglyphics and symbols. The splendid and imposing sanctuary, built in 43 BC, measured 240 x 60 meters and was restored and embellished over the centuries by many emperors. Following the edict of Constantine and the destruction of the temple, many significant remains were reused. The obelisks in Piazza della Rotonda, Piazza della Minerva and Piazza Navona, the large marble foot in via del Pie 'di Marmo, the lions of the Cordonata of the Capitol, the talking statue "Madama Lucrezia" and the statuette of a cat on the facade of Palazzo Grazioli are some of the silent stone testimonies of the charming goddess and her sumptuous temple, outlined in the centre of the capital, indifferent to the passage of centuries and changes.

"At Purgatory art thou now arrived" would say the great Dante Alighieri welcoming us in the neo-Gothic church of Sacro Cuore del Suffragio, along the Tiber, a stone's throw from Castel Sant'Angelo. Inside, there is, in fact, the evocative Museum of the souls of Purgatory, established by the French missionary Victor Jouet, following the events of 15 November 1897, when a mysterious fire broke out in the Rosary Chapel. The priest and many of the believers present saw a suffering human face in the flames which, after extinguishing the fire, remained enigmatically imprinted on the wall.The image was identified as that of a suffering soul of purgatory, and it was taking on a more serene expression with the intercession actions. Because of the event, Father Jouet decided to travel around Europe in search of testimonies of the afterlife of deceased and contacts with living relatives, collecting extraordinary fingerprints, original or photographed documents, signs and manifestations of all kinds. Mysterious "handprints of fire" on fabrics, cassocks, skullcaps, breviaries, nightgowns and wooden tablets reveal the apparitions in the presence of relatives and religious. The manifestations happened for requesting prayers, masses of suffrage or, as in a particular case in 1879, from the concern of a Belgian woman for the dissolute life led by her son. Behind the steeples and the marble whiteness of the church so-called "little Milan Cathedral ", the fans of the occult can "study" the enigmatic traces of the "little" purgatory.

A romantic island has been rising for centuries in the centre of the Tiber, between the two sides of the Ancient Jewish Ghetto and the Trastevere district. It is the curious ship-shaped profile Tiberina Island. According to tradition, around 291 BC, while Rome fell prey to a terrible plague epidemic, a ship with ten sages sailed towards Epidaurus, a city sacred to the Greek god of medicine Aesculapius, to ask for help. During the propitiatory rites, a huge snake suddenly appeared and leaving the temple, repaired on the Roman ship. Interpreted as a divine sign, the ship quickly returned to Rome and, close by the island, the snake descended into the Tiber, swam to the Tiberina Island and disappeared into the vegetation, indicating the exact point for the construction of the temple dedicated to the god. After the inauguration of the temple, the city was miraculously saved from the plague. The temple became a sacred hospital, in which religious rites and healings alternated. The ancient medical vocation of the island continues today with the "Fatebenefratelli" hospital and the Israelite hospital. On the remains of the sanctuary dedicated to Aesculapius, the Church of San Bartolomeo all'Isola was later built. In memory of the miracle, the island was given the shape of a ship, with bow, stern and main mast represented by an obelisk. The hypnotic bas-relief of a snake coiled around the god's sceptre emerges from one of the arches under Ponte Fabricio to recall the event. 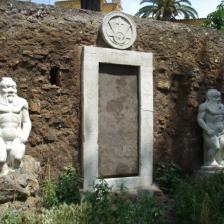 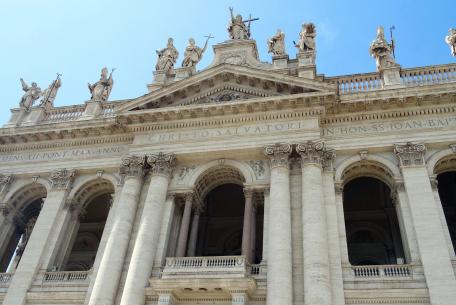 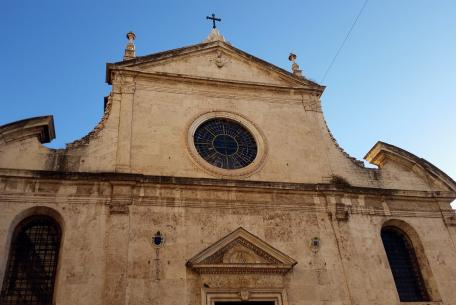 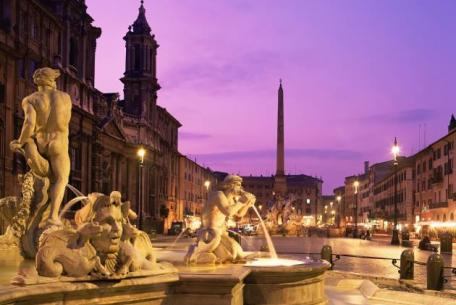 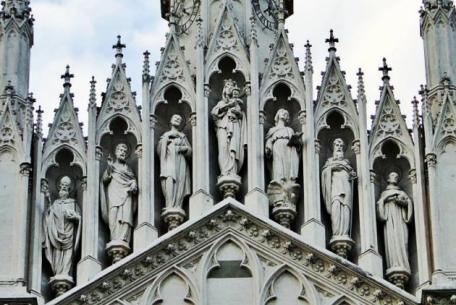 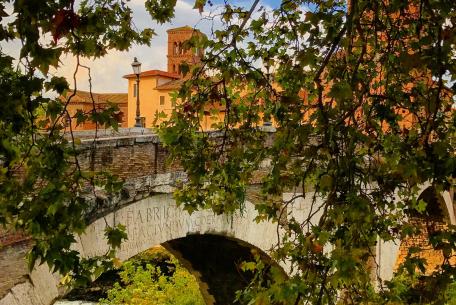