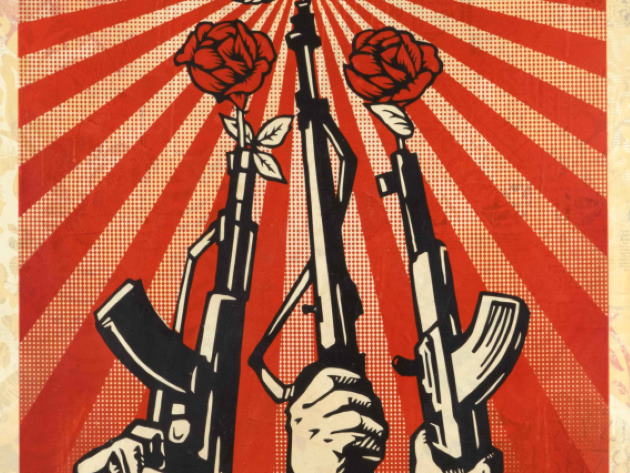 Shepard Fairey. 3 Decades of Dissent is an exhibition project curated, together with Claudio Crescentini, Federica Pirani and Wunderkammern Gallery, by Shepard Fairey himself, one of the best known and most influential street artist experimenting languages, styles and political messages through art, whose fame peaked following the iconic HOPE poster supporting Barack Obama’s 2008 candidacy for President of the United States. Obama himself, in a letter to Fairey that was later made public, thanked him.

It is an autograph copy of this iconic image that opens the exhibition, a unique and unrepeatable concept created specifically for the Gallery of Modern Art. The thirty unpublished works presented, created in 2019 by the artist, allow us to retrace many of his themes of dissent, including the struggle for peace and against racial violence, the defense of human and gender dignity, the protection of the environment.  Fairey’s political and bold style, based on the stylization and idealization of images, emerges for example in the redefinition of the famous sticker campaign “André the Giant Has a Posse” (with “André the Giant” in its HENDRIX version), in JESSE with the face of Reverend Jesse Jackson, or in POWER AND EQUALITY, dedicated to Angela Davis, an activist of the African American movement. Great political impact has also GREETINGS FROM IRAQ, structured like a postcard where the “beauties” of Iraq become the American air raids. Dedicated to pacifism, another dominant theme of Fairey, are for example GUNS AND ROSES, with roses in guns, OBEY LOTUS ORNAMENT or MONEY with Lenin, Mao and Nixon.

By choice of the artist himself, the works on display dialogue with the works of the contemporary art collection of the Capitoline Superintendence, creating “Interferences” and visual paths. The public will be able to recognize Fairey’s stylistic and artistic suggestions in the mirror of Italian contemporary art, starting with the game of glances between “Big brother is watching you” and “Il dubbio” (1907-08) by Giacomo Balla.

The initiative is part of RomaRama, the cultural events program promoted by Roma Capitale.