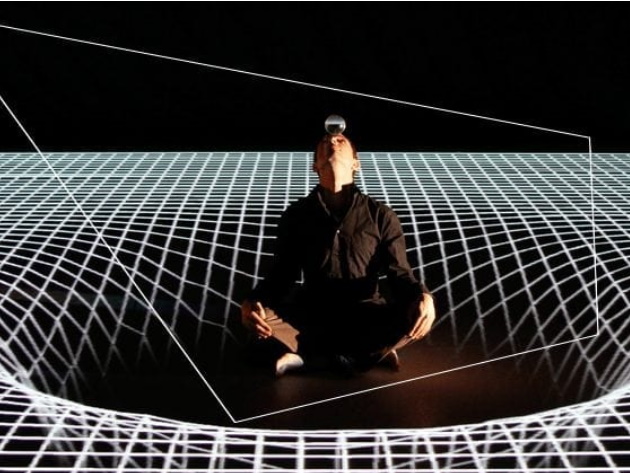 Extract is the new streaming schedule of the Romaeuropa Foundation that enhances and share the material and stories collected in its archive. Online and free full shows are extracted from the recent history of the festival in a path through talks and special contents to bring together some of the greatest artists on the international scene and trace the ranks of the dialogues undertaken in thirty-five years of history.

"Qu'est-ce que tu deviens ?", like the English, "What's up?", is a question as banal as it is terrifying; it asks what you have become. It says that time has passed and that changes have occurred. It questions the choices made, and demands an on-the-spot assessment. It freezes the process of becoming, which is by nature in motion. It shows interest in the person asked, and even love, yet it can also be a sign of disinterest or disenchantment. It is a warning signal, a sting. There is despair in the way it asks, "What have you become?", yet hope is what drives evolution. It forces us to look at the known realm behind us, while the process of becoming propels us into the future, into the unknown.

What is the consistency of dreams in today’s world of technological innovation and virtual reality? The works by Adrien M & Claire B are a possible answer to this question. Present at Romaeuropa 2014 with Hakanaï and in 2015 with Le mouvement de l’air, the duo founded in 2004 by scientist and juggler Adrien Mondot and graphic designer Claire Bardainne, is back to enchant spectators at the Festival with a new version of Cinématique, a work which won the 2009 jury’s award in the international dance and new technology competition held at the BainsNumériques Festival in France. The movement of the bodies – according to the film reference in the title – is the key to making this new day-dream vibrate: a sequence of virtual landscapes composed of natural elements, numbers, lines, points, letters and abstract figures that interact with the body of a dancer or a juggler, thanks to the sophisticated software developed by Adrien Mondot and Claire Bardainne.

A new global Agora for a genderless meta-space. This interactive digital performance, the first of its kind in Greece, addresses the challenges of our times making possible a new way to direct and produce. Written by the contemporary Swedish playwright Christina Ouzounidis, this particular overpainting of Antigone’s ancient myth, is designed by Elli Papakonstantinou specifically for the ZOOMplatform used here as an alternative “stage” with the participation of an international cast of performers. The show was redesigned especially for “Romaeuropa Festival” so that a physical and a digital audience could watch at the same time two significantly different shows that ran in parallel both in the real and virtual space. (5 performers on stage, 2 online).

Lumière III is using high precision lasers to draw rapid successions of abstract shapes on a screen, in perfect synchronisation with sound. Intense light is contrasted with complete darkness, slow movements and evolutions of tiny details are as important as strong and wild gestures. The result is both archaic and futuristic at the same time. The emerging patterns leave room for many possible interpretations; hieroglyphs, symbols of an unknown language, architectural drawings, connections between data points, or Tron-like early video games, magnified a thousand times. Fog plays also an important role, it makes the laser beams visible and creates a three-dimensional sculpture connecting the screen and the lasers with the auditorium. Lumière III is entirely based on software written by the artist.

Ravel’s Boléro is not an untouchable monument, but something that belongs to each and every one of us. Starting from this assumption, Spanish choreographer and dancer Jesús Rubio Gamo (Madrid, class of 1982), returns to the stage with a new show inspired by Ravel’s famous score. His Bolero is a real hymn to dance and movement, a work that explores resistance and human encounters- a fight against time that leaves us broken.

The show represents the manifesto of Virgilio Sieni's choreographic art and an emblem of his research on the body and the languages ​​of dance and art. Always striving to go beyond formal approaches and codifications, in this work, Bach's music defines a metric and an immaterial architecture in which the dancer subscribes by implementing a continuous rethinking of the body and hinting at an articulated path of prostrate figures, drawn from Italian art from the 1300s to the 1600s. The body assimilates the images of the past and becomes the threshold through which to reflect on the future. A journey of the gesture from one figure to another, in the intertwining and the chiasma, through resonances and revelations of the work of art.

An original artist on the new dance scene, Nicole Beutler focuses on escaping stereotypes and on creating an externally strong and current outside the box artistic path. What is 3: The garden? A philosophical reflection? A theological treatise? An ironic stance underlining the gap between man and nature? Using a simple but effective direction, the Dutch choreographer accompanies us in a world that has yet to be born, or rather, explode, in a universe where the only thing that exists is movement, gesture, and union. 3: The Garden is a show divided into three acts and performed by three couples of dancers. The artist pushes us to focus our reflection on the importance of contact with the elements, in their way of combining with each other, in the ability of a body while appropriating a space.

If BABAE in Tagalog (Filipino language) means woman, then the play presented by the choreographer and dancer Joy Alpuerto Ritter is a complete tribute to a female identity. Not surprisingly, she is inspired by the "Witch Dance" by the dancer Mary Wigman. Merging Philippine folk and classical dance, hip hop and voguing movements, Alpuerto evokes the power and mystical practices of a dancer-witch bringing to life a woman's dialogue with the animalistic and sensual qualities of ritual and energy.