Kites and spinning tops from Japan 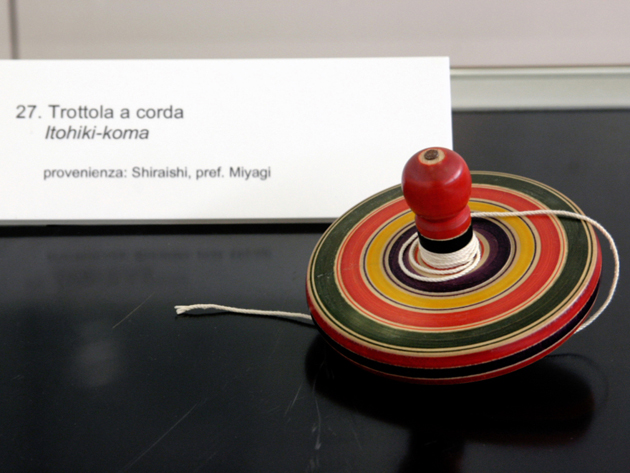 The Japanese Institute of Culture presents an unusual and fascinating exhibition, due to the links it has with Japanese folklore and culture. In fact, the approximately 50 examples of kites and spinning tops from all over the territory offer us an insight into the more strictly ethnic aspects of the Land of the Rising Sun, which include local variants and references to seasonal feasts.The wonderful objects on display tell us of very ancient construction techniques, of simple materials, such as wood and paper which, despite contrasting with the vision of a contemporary technological Japan, represent a tradition that is still alive and current.

Of Chinese origin, the first kites date back to about two thousand years ago. Their appearance in Japan dates back to the Heian period (794-1185 AD), when they were called "paper hawks", translation of the name in Chinese language. The real golden age, however, was the Edo period (1603-1868). In fact, the development of the woodcut technique gave rise to the expression ukiyo-e (literally, images of the floating world) and the kites were enriched with pictorial and chromatic elements, with extraordinary results.Today, kites, bearing messages of good wishes, are used in traditional festivals (matsuri), such as Kodomo no hi (literally children's day), which falls on May 5th. In fact, it is thought that launching a kite bearing the name of the male child, together with the representation of the legendary warrior Kintaro, or the brave hero Ushiwakamaru, guarantees him strength, health and luck. Often the kites also have an apotropaic purpose; decorated with monstrous or demonic faces, they have the task of protecting the house, or ensuring its inhabitants health and serenity.

Spinning tops, across the Asian continent, arrive in pre-Heian Japan about twelve hundred years ago. At first considered an entertainment for nobles, they later became widespread. Currently there are over a thousand types of spinning tops of various sizes in Japan, traditionally made of maple wood or dogwood.