On the night of December 23rd into the early morning hours of the 24th, the Romans went to the fish market, or cottio, which was set up at Portico d'Ottavia in the Jewish ghetto back in the times of the Papal States. Pope Pius VII then had it moved to a fish market on Via delle Coppelle, where it was held until the Italian Unification. It was then transferred again to San Teodoro and, in 1927, to the Mercati Generali area. The cottio, therefore, survived twists and turns throughout the history of Rome and over time became a special event that drew in illustrious travelers, and lords and ladies dressed in their finest. 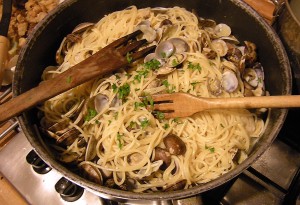 This tradition of big dinners on the night of the 24th and day of the 25th has been kept alive in Roman families to this day. If we go and dust off some menus of the past we can see that fish and seasonal vegetables were the main players, followed up by the traditional desserts. The Christmas Eve menu generally included appetizers such as peeled shrimp, octopus, marinated eel, and pickled vegetables; a first course such as brodo d’arzilla (skate broth) or spaghetti con le vongole (spaghetti with clams); a second course such as broiled fish or peeled prawns accompanied by must-have side dishes with all sorts of fried delicacies no doubt including cauliflower or broccoli, artichokes, zucchini, cardoons, filetti di baccalà (fried codfish), potatoes, apples, and ricotta. The dinner would conclude with oranges, mandarins, clementines, dried fruit, walnuts, and hazelnuts, and last but not least traditional desserts such as pangiallo and torrone.

On December 25th the traditional Roman menu was equally as sumptuous: stracciatella (egg-drop soup) or cappelletti in brodo (meat-filled pasta served in broth), followed by cappone in brodo (capon in broth) with an aromatic sauce made of parsley, anchovies, vinegar, capers, garlic, breadcrumbs, and oil; breaded lamb chops with a side of fried vegetables, sautéed chicory or boiled cardoons sautéed in butter and parmesan. Again, the meal would end with seasonal fruit and desserts. Traditional desserts could once be found at the famous pastry shops of Scurti in Piazza San Luigi dei Francesci, Panelli on Via Dogana Vecchia, Loreti on Strada Papale, and Giuliani on Via del Teatro Valle. Today pangiallo and torrone are somewhat of a rarity.
The Roman version of pangiallo has origins dating all the way back to the Ancient Roman Empire. The custom was to make and distribute this dessert on the winter solstice as a good auspice for the return of long sunny days. In fact, the look of this cake is slightly reminiscent of the sun. Here we include a recipe provided by Ada Boni.

Preparation
Combine flour, yeast, and a little warm water and mix into soft dough. Add candied orange (or citron) rind, almonds, spices, oil, and raisins and mix until dough is uniform. Work the dough into a dome shape and let stand overnight in a warm dry place. To coat the top of the pangiallo, prepare a thick glaze with a spoonful of flour, a little oil, the same spices used in the dough, and sugar. When the dough has risen, spread glaze on top with a spatula (in the past, they also drizzled a solution of water and saffron over the glaze, which is where it gets the name pangiallo, or “yellow bread”). Preheat oven to 190° C and bake loaf until it darkens up.

Where to find Roman Pangiallo