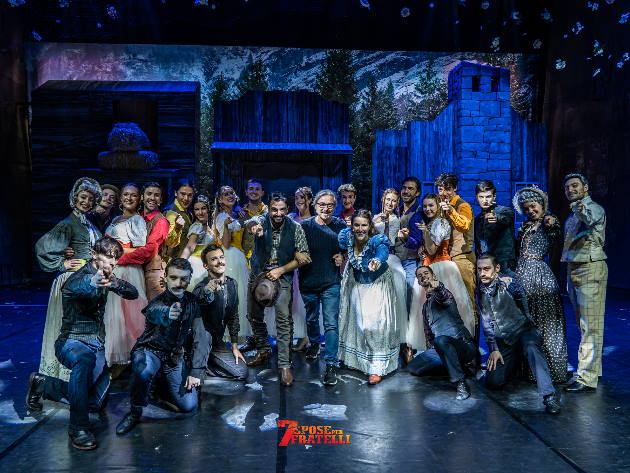 One of the most loved musicals by the public returns to the stage of the Teatro Brancaccio in a new production taken from the famous 1954 film by Stanley Donen.

In 1850, the seven Pontipee brothers lived on a farm against the backdrop of the Oregon mountains: Adam (the eldest), Benjamin, Caleb, Daniel, Ephraim, Philidorus and Gideon. Adam, looking for a wife, meets Milly, the maid of the village inn, and falls in love with her. After getting married and returning to the farm, the young woman discovers that she has to take care not only of her husband but also of his six rough brothers. Milly thus plans to introduce her brothers-in-law to her friends in the village to get them married. She has the opportunity during a village feast where the six Pontipee brothers show their dance skills. A series of funny and extraordinary events - including a fight and kidnappings, will lead to a general wedding.

The staging is also inspired by Quentin Tarantino's ironic Western characters and settings and Broadway and the West End spectacular and aesthetic canons in Italo Grassi's set design and Silvia Aymonino's splendid costumes.

On stage is an extraordinary cast of 22 performers - dancers, singers, and actors - with Diana Del Bufalo and Baz in the roles of the protagonists, directed by Luciano Cannito and accompanied by a live orchestra conducted by Peppe Vessicchio.