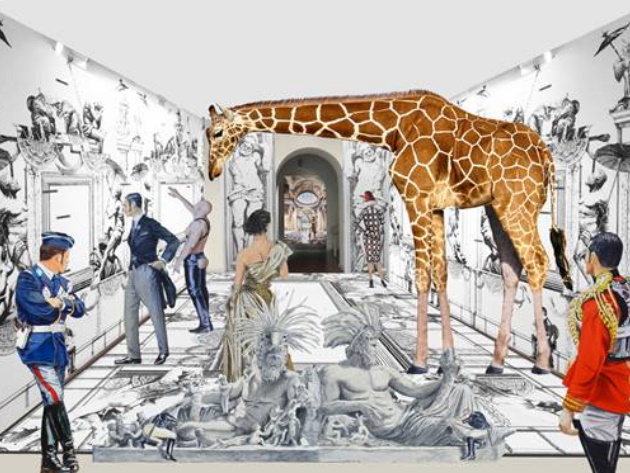 On display, 12 paintings, drawings, and three-dimensional installations by Ignacio Goitia (Bilbao 1968), Basque painter and creative: a sort of ideal summary of his artistic career, told by his most evocative works in which freedom and respect for diversity are fundamental values.

The exhibition traces the different phases of the artist's pictorial production. Curated by the artist, the scenographic aspect of the installation helps to better understand his universe beyond the paintings. On display, his early works as well as his latest compositions such as the series for colonization and globalization.

The influence of the Roman tradition is evident and can be seen in most of the cities and buildings portrayed. Goitia's works are often set in architectural buildings built centuries earlier.

The division of the space into rooms separated by sheets painted as "boiserie" takes the viewer into a world where reality and fantasy coexist naturally. In this way, the "showcase" overlooking Piazza Navona is occupied by the structure of a three-dimensional painting of which the viewer can be a part, as well as, within the exhibition, he can be part of the painter's universe.