Church of Santa Maria in via Lata 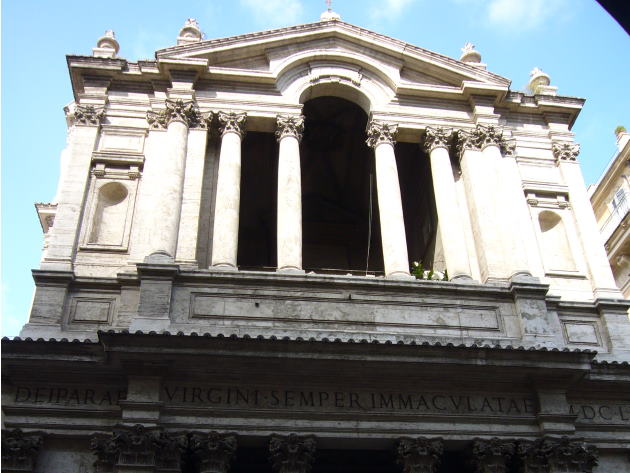 Of ancient foundation, the church is named after the urban section of the Via Flaminia (the present Corso) and stands on the remains of a massive Roman structure, part of which (probably hosting commercial warehouses) was re-used as a church institution perhaps already at the end of the 7th century. Its current baroque design dates back to the major renovation works started in view of the Holy Year of 1650 and entrusted to architect Cosimo Fanzago, but the primitive building for worship and assistance of the faithful had already undergone radical changes over the centuries: perhaps due to the frequent flooding of the Tiber, in 1049 the church was rebuilt at a higher level, partially walling off the pre-existing structures and partly transforming them into the crypt of the new medieval church. The church was then again enlarged and raised at the end of the 15th century, and works lasted throughout the 16th century. The elegant Campanile is the work of Martino Longhi the Elder and was built in 1580, while the beautiful 17th-century façade with portico and loggia is due to Pietro da Cortona, who added a plaster covering and elaborate stucco decorations to the bell tower.

The decoration of the interior is spectacular in its richness: the polychrome marbles, the gilded stuccos, the brightly colored paintings of the 17th and 18th centuries and the Sicilian red jasper that covers the twelve ancient cipollino columns give it a solemn and festive aspect. Survivals from the church’s past are the remains of a Cosmatesque-style polychrome marble floor floor in the Chapel of the Sacrament at the bottom of the right aisle and the icon of the Madonna Advocata on the high altar, signed by an unidentified Petrus pictor and dating between the 11th and 13th century, which is said to have elicited many miracles. Due to its proximity to the Roman residence of Napoleon’s mother, some members of the Bonaparte family were temporarily buried in the church, including Zenaide Bonaparte whose memorial is still preserved in the church.

A door to the left of the atrium leads to the underground rooms, the oldest part of the church converted into the crypt. The interior of the building housed a series of frescoes dating from the late 6th to the early 7th century with Stories of the Seven Sleepers of Ephesus, the Judgment of Solomon, the Prayer in the Garden. In the 8th century, some episodes from the life of Saint Erasmus and Saint John and Saint Paul were added. The 17th-century rebuilding work and the interventions of Pietro da Cortona himself helped to preserve them but in 1960 some of them were detached from the walls for conservation purposes and taken to the Museo Nazionale Romano - Crypta Balbi. According to a legend, St. Paul was held in captivity in this place: one of the rooms of the underground church contains a Corinthian column in granite to which he would have been tied and an octagonal well from which a prodigious source would have sprung up following the saint’s prayers.