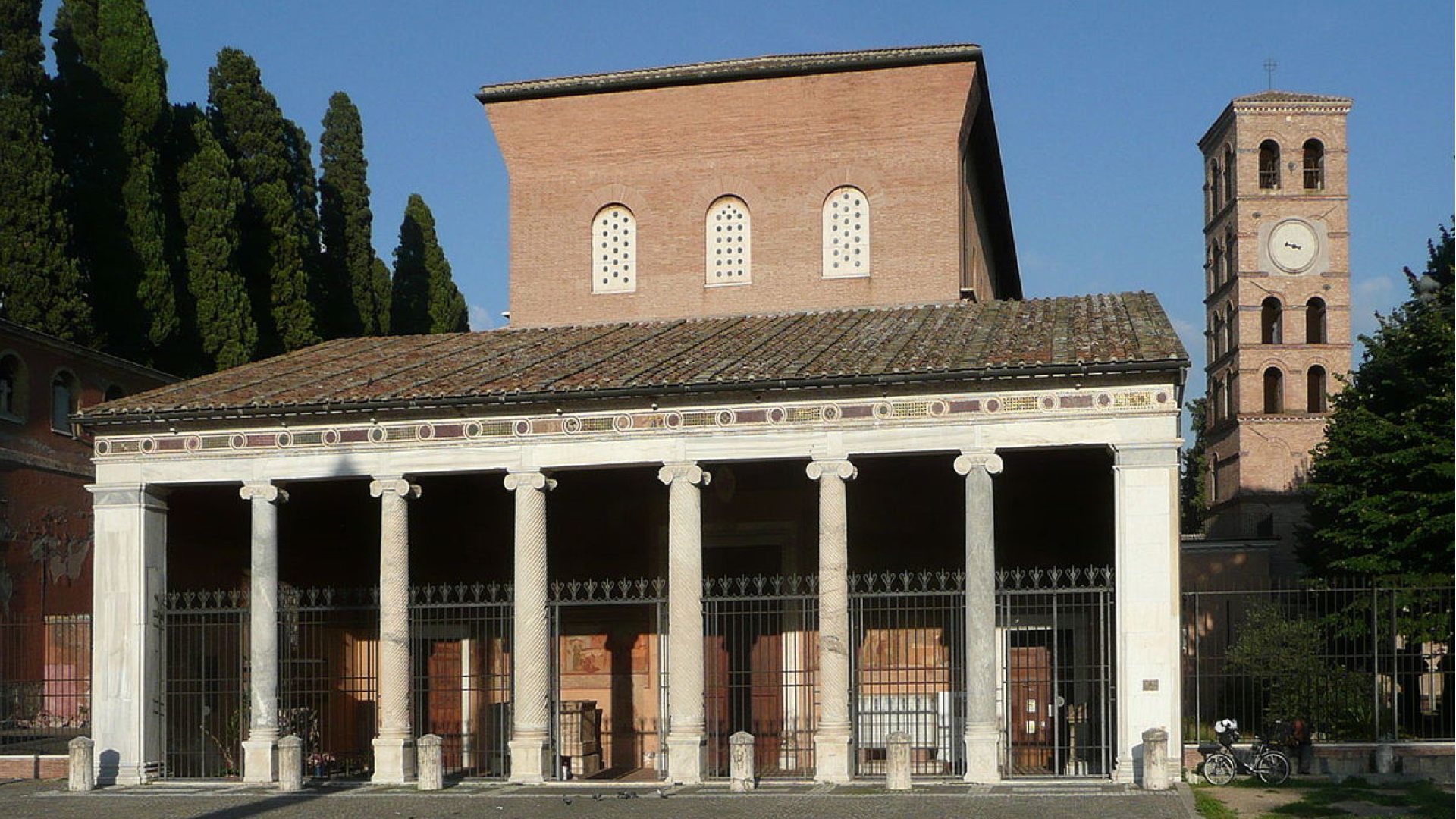 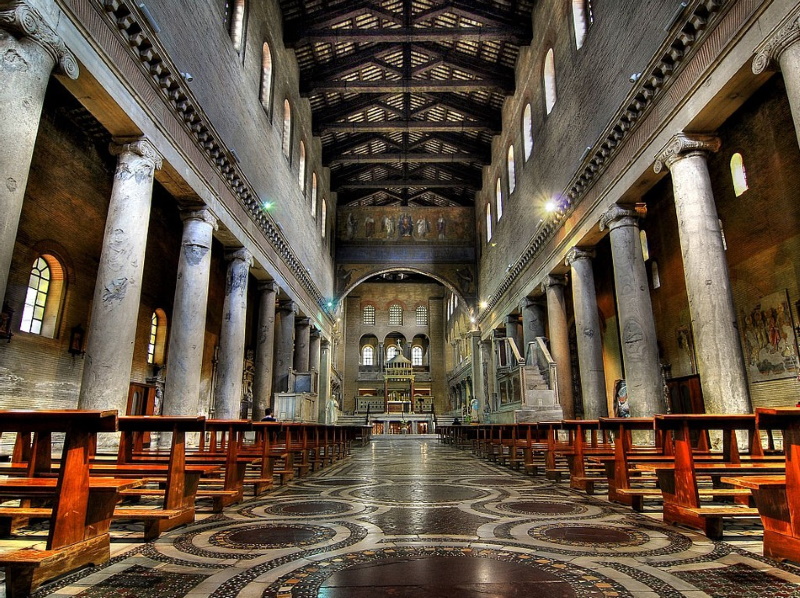 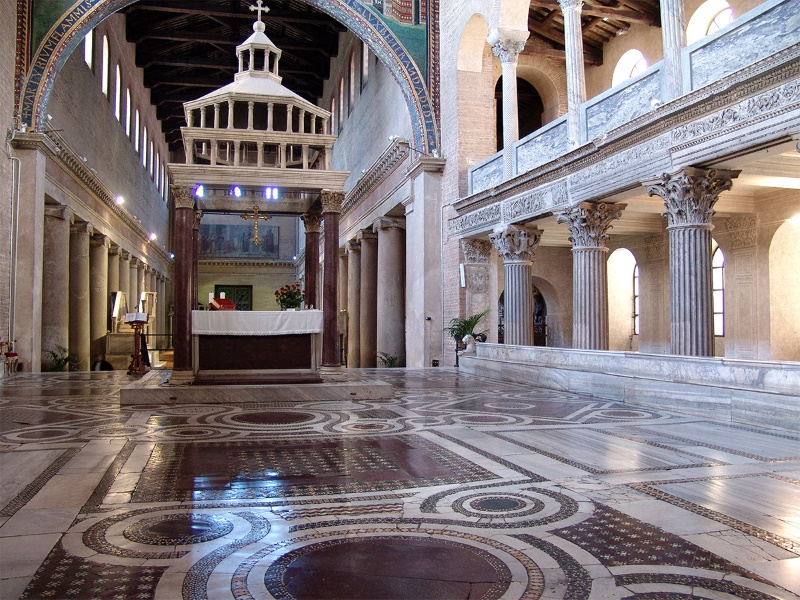 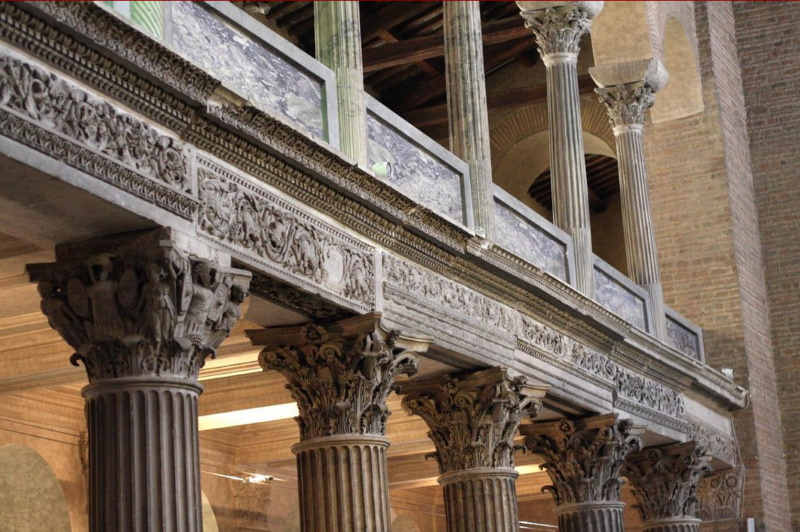 The basilica of San Lorenzo fuori le Mura (Saint Lawrence outside the Walls) comes from the combination of two distinct churches, one built in the 6th century AD and the other at the beginning of the 13th century AD around the tomb of Lorenzo, deacon of Spanish origin martyred under emperor Valerian and buried in the cemetery of Ciriaca along the Via Tiburtina.

The church also keeps the relics of Santo Stefano (protomartyr) and is one of the most worshipped in Rome. It is also included within the restricted number of the five most ancient and relevant patriarchal basilicas.

Emperor Constantine had already restored and adorned the tomb of San Lorenzo in the 4rth century and built a big cemeterial basilica (basilica maior) in the surroundings. At the end of the 6th century, pope Pelagius II built a new church, with three naves and practicable galleries (matronea), that completely englobed the tomb (basilica minor).

The ancient basilica maior was destroyed between the 9th and the 12th century. Clement III (1084-1100) built the Cloister and started fortifying the village (Laurentiopolis) that had developed around the basilica. Honorius III Savelli (1216-1227) gave the complex its current appearance by building a new church that englobed the basilica built by Pelagius and transformed it into a presbytery inverting its orientation. Innocent IV (1243-1254) raised the presbytery and commissioned the papal chair. Numerous restorations were performed in the course of centuries. The most radical one was in the 19th century by Virgilio Vespignani (1855-1864), almost thoroughly canceled by the rebuilding following the bombing in 1943, which tended to give the medieval appearance back to the church.

The brick facade with three arched windows was completely rebuilt after the bombings and is preceded by a portico attributed to the Vassalletto (around 1220), a member of a family of marble workers. It was supported by six bare columns surmounted by a trabeation with a rich polychromatic frieze. The 12th-century Romanesque bell-tower rises on the right behind the facade. The Porch is decorated with 13th-century frescoes (Stories of St. Lawrence and St. Stephen and of Count Henry). Inside it, you can find two lions (that were already in the ancient vestibule) on the sides of the entrance portal and two Sarcophagi decorated with Stories of the Old and New Testament and Scenes of Vintage that deserve to be mentioned.

At first sight, the interior with three naves reveals the non-homogeneous structure of the church with the two basilicas adjacent but not perfectly aligned. The twenty-two columns that divide the naves are different in size and marble and perhaps come from the basilica maior. The counterfacade presents the Tomb of cardinal Enrico Fieschi, consisting of an early Christian sarcophagus with a wedding scene and a canopy. The floor, the ambos, and the Easter candelabrum are Cosmati works (end of the 13th century).

The 19th century chapel of San Tarcisio by Vespignani opens at the end of the right nave. It has a beautiful Beheading of the Baptist by Giovanni Serodine (1619) of the school of Caravaggio. A chapel in baroque style with funerary monuments designed by Pietro da Cortona dedicated to Santa Ciriaca can be accessed from the end of the left nave. Two small stairs lead to the presbytery, where the confession of San Lorenzo’s tomb is placed between four black and white columns. The presbytery is framed by marble columns that support a magnificent trabeation with arm trophies and vegetable motifs (4th century).

The trabeation holds the matroneum. At the center of the Cosmati floor stands the ciborium, the most ancient work signed by Roman marble workers (1148), consisting of four porphyry shafts that support a pyramidal covering on small trabeated columns. The bishop’s chair is placed on the back wall (1254). It is decorated with polychrome mosaics and marbles, while the triumphal arches decorated with the famous mosaic dated back to the end of the 6th century and represent Christ among the Saints, Paul, Stephen, Hippolytus, Peter, Lawrence, and pope Pelagius. The pope is depicted in the act of offering Christ a model of the basilica minor. Pious IX’s funerary chapel was built at the end of the 19th century by reusing the narthex of the basilica built by Pelagius. It can be reached from the end of the side naves. 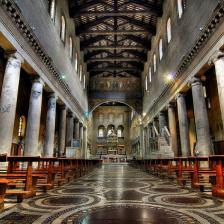 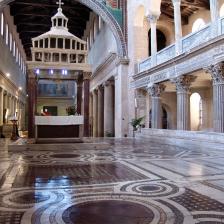 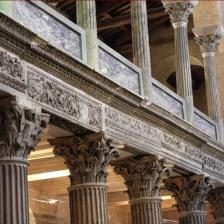