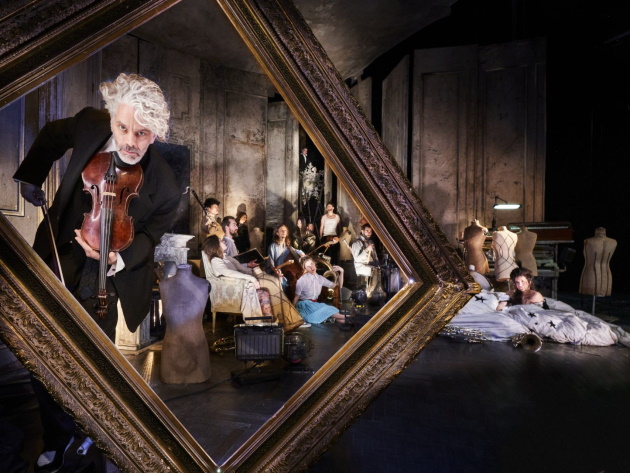 «A place. A vast space. The reverse open, a fleeting perspective on creation. A spectacle of delirious twists and turns about art, the body and the INSTRUMENT. In the room. A room where everything is possible,  verything comes together, descends… Into complete and utter chaos. ROOM is turned on its head. Collision, reverberation, white magic… the perfect arrangement. Inside, a chamber orchestra practices. Hidden from view, the vertiginous cacophony digs deep magical tunnels and crazy pools. Where does the end begin?… Where does the beginning end? Forbidden, the bodies and notes become one, piece by piece, and cross the tempo of the quavers to reach the climax. The walls breathe. A leg has fun, trotting out a tick-tock to the tempo. Then the room howls with laughter and disappears. Before appearing as a blur. In our image». James Thierrée

After the great success of Raoul in 2019, the histrionic and unpredictable James Thierrée, an icon of contemporary creation, returns to the prestigious stage of the Teatro Argentina to open a new chapter in his twenty-year artistic career.

An intense journey that, with Room opens in the sign of music, the work of this multifaceted artist who overcomes the boundaries of any discipline and makes to dream with open eyes his audience. The songs for the show were written and composed by the same Thierrée. Thirteen musicians and extraordinary dancers ready to push the connection between their instruments and the body accompany him on stage.

Inside Thierrée's "room" is a chamber orchestra lost in its music, walls sing, doors and escape routes lead to illusion, magical tunnels, dreams, and nightmares cross them. Room is a crazy party, an adrenaline-like flight into the theater sky, but it is also melancholic and romantic as only a dream can be.