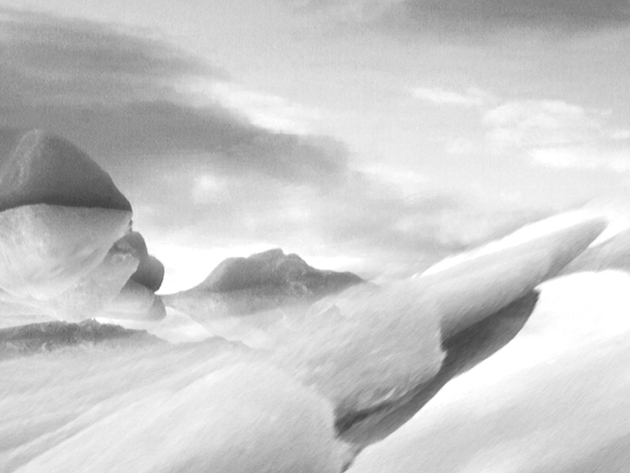 The exhibition Cosmogonia presents works by Daniela Monaci and poems by Sonia Gentili transformed into a visual installation (seven Sheets and a Book with dynamic text) by the collective L'uomo che non guarda (Sonia Gentili and Ambrogio Palmisano).

The artists' personalities are linked by the intention of overcoming the limits of optical perception to find a prophetic gaze dropped into the uncertain core of reality, in search of an apocalyptic unveiling placed on the fragile ridge that divides the appearance and the happening of things, at the point of intersection of timelessness with the time evoked in T. S. Eliot's Four Quartets.

In the exhibition, the textures and geometries of nature enter into a relationship of correspondence with the unravelling of the verses on the electronic pages, in a perennial trend of emergence and sinking of the word and forms grafted to the metamorphic interweavings of a world poised between its transformation and its immutable original matrix.

The works are harmonised with the spaces of the Bilotti museum to accompany us on a journey whose points of departure and landing remain suspended in the uncertainty of a road that can only be realised through personal immersion in the depths of the exhibition.

Daniela Monaci traces the routes of a navigation designed to Smarrirsi (the title of one of her series of works) and find oneself again in the figurative reappearances of human beings that emerge from a sea of fog, from a symbolic haze that envelops bodies and returns them as if at the end of a shipwreck, in the cosmogonic re-creation of a world in which new lands rise from the waters of nothingness, evoked by the blinded gaze of eyes that are closed but immersed in the darkness heralding prophecy.

The Fogli e il Libro (Sheets and Book) of the collective L'uomo che non guarda transforms Sonia Gentili's texts into visual poetry in which the text, dynamised so as to gradually emerge, is on its way to its form. The words slowly emerge like blooms of black in the whiteness of digital paper, an imperfect vision by speculum in aenigmate of an earthly world to which the mystery of existence denies and arbitrarily grants the hope of a superior world.

On the occasion of the exhibition a catalogue will be published by Ensemble Edizioni, Rome, with texts by Lorenzo Canova, Giovanna dalla Chiesa, Giorgio Patrizi with a contribution by the Collective L'uomo che non guarda.