Basilica of Saints Marcellinus and Peter 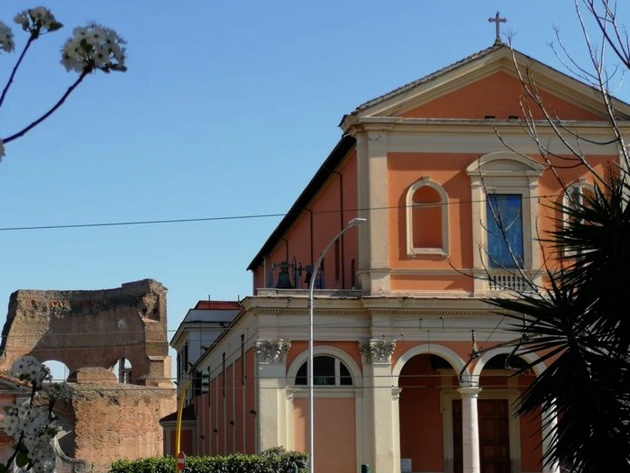 The church is located along the ancient via Labicana (now via Casilina), in an area that in Roman times was owned by Elena, the mother of Emperor Constantine I, and which today is known as Ad Duas Lauros , as it belongs to the pilgrimage itineraries of the Southern Via Francigena.

Before it became imperial property, the area hosted the necropolis of the Equites Singulares, the emperor's personal guard, and the catacombs of Saints Marcellinus and Peter, built during the persecution of Diocletian (284-305). In 330 Constantine I built a mausoleum there, now known as the Mausoleum of Helen, with an adjoining cruciform basilica dedicated to saints Marcellinus and Peter, buried in the catacombs of the same name.

In the late Middle Ages the basilica, whose foundations were compromised perhaps by the galleries dug in the catacombs, slowly fell into disrepair and was abandoned. Partly reusing its ruins, between 1632 and 1638, under Pope Urban VIII, a new small church was erected dedicated to the two saints, then enlarged in 1765 during the pontificate of Pope Clement XIII.

In 1922, on a project by the engineer Guglielmo Palombi, the current building was finally built: after the last restoration work completed in 2000, the mausoleum of Elena and the catacombs of Santi Marcellino can now be accessed from the courtyard of the oratory next to the church. and Pietro crossing a monumental eighteenth-century portal.

Outside, a three-arched portico supported by two Corinthian columns opens between two lateral bodies with four Corinthian pilasters. Above the latter, there is a simple facade with a balustrade window flanked by two niches and surmounted by a triangular tympanum. The interior, with a basilica plan, is divided into three naves by two rows of Doric travertine columns. The central nave is covered with a coffered ceiling and ends with a semicircular apse where an 18th-century altarpiece depicting the Martyrdom of Saints Marcellin and Peter is placed, oil on canvas from the Roman area.