The Church of Saints Quirico and Giulitta 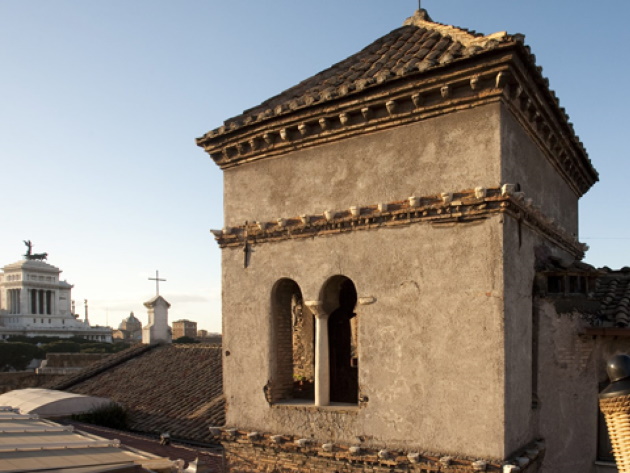 Located along via di Tor de' Conti, behind the Forum of Augustus and Nerva, the Church of Saints Quirico and Giulitta is dedicated to the two martyrs of Tarsus: the little 3-year-old Quirico and his mother Giulitta who died in the 4th century for refusing to deny their faith.

It is a church of ancient origins located in the monumental center of ancient Rome, which sees the construction of buildings of Christian worship only from the mid-6th century, because of the memory of the pagan past of the area and the opposition of the senatorial aristocracy.

The church of Saints Quirico and Giulitta is also the only one of a group of churches to survive the 1930s demolitions for the opening of via dell'Impero, the current via dei Fori Imperiali.

Dating originally from the time of Pope Virgil (535-545), it was initially dedicated to the martyr Saints Stephen and Lorenzo; in the 8th century, it was consecrated to Saints Quirico and Giulitta.

Over the centuries, it underwent numerous reconstructions and interventions, such as the addition of the Romanesque bell tower built by Pope Pasquale II (1099-1118). At the end of the 15th century, other restorations were made, and the medieval bell tower was incorporated into the adjacent building. In 1584, its orientation was reversed. At the beginning of the 17th century, Pope Paul V raised the church by about four meters to preserve it from the humidity and floods of the Tiber. In 1722, Innocent XIII granted it to the Dominicans who, between 1728 and 1735, remade its facade, probably on a project by Filippo Raguzzini.

The facade of the church is divided into two orders by a high cornice. The lower part of the facade is decorated with three round arches supported by simple Tuscan pilasters. In the central arch, the 15th-century portal opens with a marble frame surmounted by an elegant tympanum. Along the right side of the church, there is the 12th-century Romanesque bell tower with three separate orders, which bell cell has partially walled triple lancet windows.

The interior of the church has a single nave and ends in a quadrangular apse. The vault is a barrel vault, which, in 1856, was frescoed by Pietro Gagliardi. Along the nave, there are four side altars, two on each side.

The apse houses the ancient 17th-century high altar surmounted by a coeval altarpiece with the Martyrdom of Saints Quirico and Giulitta.

In the basement, there is the Museo tipologico internazionale del presepio Angelo Stefanucci, with cribs from different places and eras.