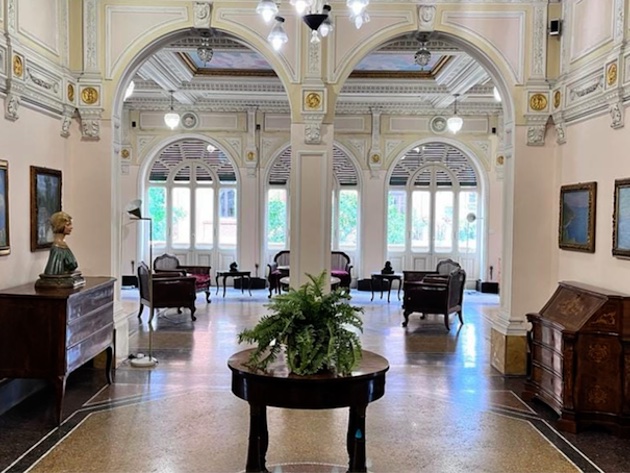 The exhibition at the Andersen House Museum, curated by Maria Giuseppina di Monte and Valentina Filamingo, traces the Italian journey of Hendrik Christian Andersen and the choice of Villa Helene in Rome as his home from around 1925 to 1940, the date of the artist's death. The exhibition is divided into four sections, each of which represents a part or an aspect of the life of the Andersen, a family of artists from Norway, who subsequently emigrated to the United States and finally settled in Rome.

The first section "Andersen and his home" presents the rooms of the noble floor inhabited by the family and rearranged with original furnishings, paintings and sculptures recently restored as they appeared at the time the family lived there; in fact, thanks to the archive photos, it was possible to reconstruct the interior of the first floor of the study-home. The second section entitled “The great utopia” exhibits projects, drawings and photographs of the World Communication Centre that Andersen never saw built; in the third section “The affections” there is a selection of paintings and sculptures representing the members of his family. The last section "The circle of friends" is finally dedicated to the group of friends and acquaintances who frequented the Andersen house and shared the same ideas: they were intellectuals, artists, philanthropists and journalists. First of all the writer Henry James whom Hendrik Andersen met in Rome.

The exhibition is a rare opportunity for the public not only to admire all the works and artefacts on display, but also to plunge themselves in the cultural fervor which animated the capital in the first half of the twentieth century.