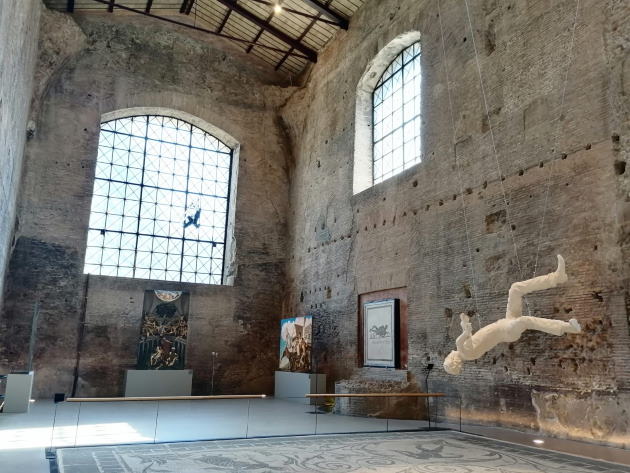 He was born in Bologna in 1922 but it is in Rome, on the beach of the Idroscalo of Ostia, that Pier Paolo Pasolini was brutally murdered on the night between 1 and 2 November 1975. His tragic death is the source of inspiration for the exhibition project conceived by the artist Nicola Verlato and curated by Lorenzo Canova, with the participation, among others, of Vittorio Sgarbi, Umberto Croppi and Miguel Gotor.

Part of PPP100, the program of cultural initiatives promoted by Roma Capitale on the occasion of the centenary of the birth of the Italian artist and intellectual, the exhibition is divided into a series of artistic variations – paintings, sculptures, drawings, architectural projects, music and videos – which interact with the imposing Halls of the Baths of Diocletian.

The exhibition centers upon a large canvas which, like an ancient altarpiece, represents Pasolini’s body as he goes back through his life. Other pictorial works deepen other aspects connected to the representation of the main painting. Also included in the exhibition are a frieze over 11 meters long, a life-size sculpture depicting Pasolini in an extremely realistic way and some sculpted heads. Symphonic music and video projections complete the exhibition, also enriched by a selection of photographs portraying Pasolini at public events between 1959 and 1968.