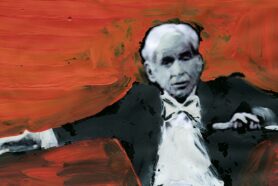 Mass, or literally, Mass: A Theater Piece for Singers, Players, and Dancers is an opera by Leonard Bernstein, written in 1971 at the request of Jaqueline Kennedy Onassis, and performed the same year at the inauguration of the John F. Kennedy Centrefor the Performing Arts in Washington.

More than a sacred work, as can be understood from the subtitle, it is a real "play for singers, musicians and dancers", that is a sort of spectacular musical in English and Latin, for which tapes are used pre-recorded and interventions by an orchestra of over one hundred elements, a rock band, two mixed choirs and one for children's voices and a solo singer-actor who plays the part of the “Celebrant”. Considered one of the most complex and singular scores of the contemporary period, the work represents a "spectacularized" form of a Holy Mass, in which the strong emotional tension reaches its climax in the central scene of the elevation of the Body and Blood of Christ by the Celebrant.

Eclectic composition in style and heterogeneous in structure, the work, as it was conceived, reflects the period of strong tensions and political instability that characterize it: with the war in Vietnam just ended and the student protest still ongoing. In its complexity, however, it is an original masterpiece, the fruit of the creativity and sensitivity of the genius of Bernstein.