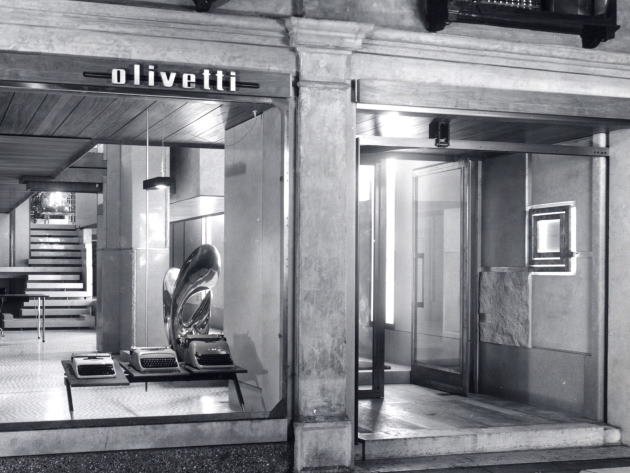 Carlo Scarpa and Adriano Olivetti met for the first time in Venice in 1952, during the 4th Congress of the National Urban Planning Institute: for the Venetian architect it was the beginning of a long collaboration with the “Olivetti world” which lasted even after the sudden death of the charismatic entrepreneur in 1960, translating into project opportunities on commission for over twenty years.

Between 1956 and 1978, the cooperation between Carlo Scarpa and the Ivrea-based company led to the birth of exceptional projects, such as the famous Olivetti Showroom in Piazza San Marco in Venice, entrusted since 201 under concession to the FAI, the mountain colony of Brusson in the Valle d’Aosta region (not built) and the setting up in London of the exhibition Frescoes from Florence on behalf of British Olivetti. It was an atypical client relationship, based on an intellectual harmony and on a real sharing of values, themes and events that profoundly marked the Italian architectural culture in the 20th century.

The exhibition at the MAXXI museum curated by Elena Tinacci tells the story and the facets of this extraordinary years through drawings, photographs, documents and publications from the Carlo Scarpa Archive kept by MAXXI Architettura, a precious heritage that over the years has allowed study and enhance the work of one of the Italian protagonists of the 20th century and to reveal its many suggestive meanings.