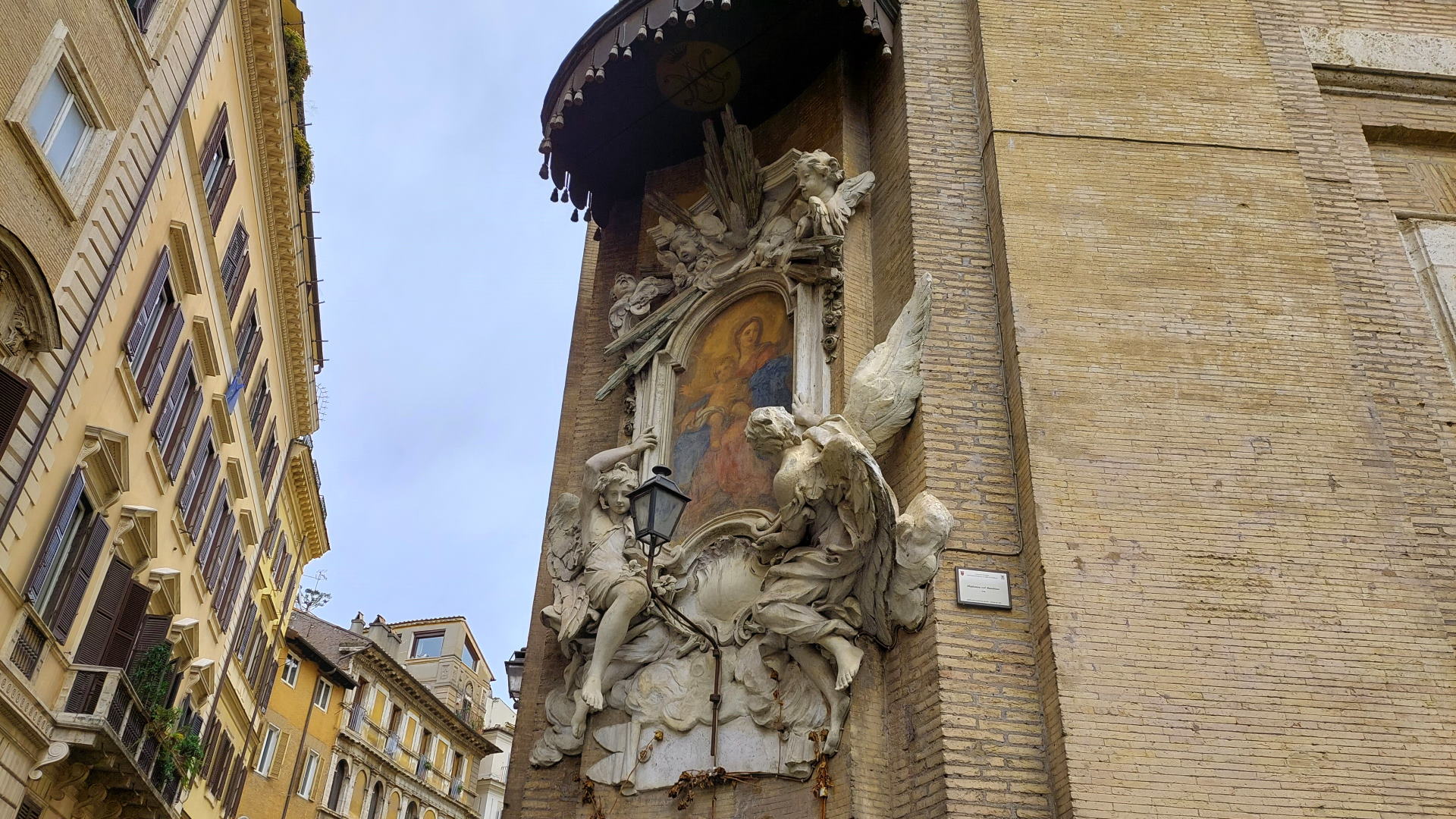 Tiny shrines hanging on the walls of ancient buildings, mostly at a street corner, the majority of which portraying a Madonna, and sometimes so simple and modest that they remain unnoticed by those who walk around the city. The Romans call them “Madonnelle” and are the expression of a profound popular, street devotion that reflects the intensity of the Marian cult in the city. Their use, however, dates back to ancient Rome, when the Lares Compitales, the pagan deities maybe of Etruscan origin, were entrusted with the protection of all street intersections.

Made of oil or fresco paintings, marble or terracotta carvings, or mosaics, they are today about 500 but once they were thousands, surrounded by votive offerings left by the faithful: up to the early 1900s they used to be well cared for by the local inhabitants, whose donations were used for a constant maintenance, and for keeping candles and lanterns burning in front of them at all times. In this way, in the days before gas and electricity, they provided almost the only form of lighting in the streets of Rome.

The oldest Madonnella is the so-called “Imago Pontis”, and it was so well-known that it identified the stretch of road on via dei Coronari where it still stands. It dates back to 1523: Alberto Serra da Monferrato entrusted the architectural part to Antonio da Sangallo the Younger and the pictorial one to Perin del Vaga, who painted a Coronation of the Virgin of a so high level to be mentioned by Vasari in his Lives. However, most of the surviving sacred shrines date back to the 17th, 18th and 19th centuries, with baroque or neoclassical forms, and in many cases they are accompanied by scenographic canopies, fringes, swirls, volutes, columns and cherubs. Although often damaged by the passage of centuries, each of them is a small work of art, the result of almost always anonymous workers, and each has a story to tell, including miraculous events, sacrileges and graces granted. Sometimes they had such a high importance that they were moved inside churches and chapels, such as the Madonna of Strada Cupa, painted on a wall at the foot of the Janiculum Hill and then transferred to the basilica of Santa Maria in Trastevere by virtue of the many miracles that were attributed to her.

The most famous prodigy linked to the Madonnelle, however, occurred in 1796, on the eve of the Napoleonic invasion: on 9 July, and throughout the whole month of that year, dozens of images in different parts of Rome began to move their eyes, starting from the Madonna dell’Archetto in the Rione Trevi, already venerated for its miracles and then transferred to a tiny chapel in the mid-19th century. Due to the big resonance of that event, the pope appointed a special commission to investigate it: of the 26 Madonnelle examined, five were declared miraculous. In addition to the Madonna dell’Archetto, the others, still preserved, are the Madonna della Divina Provvidenza in via delle Botteghe Oscure, the Madonna della Pietà in Vicolo delle Bollette, the Madonna del Rosario in via dell’Arco della Ciambella (now thers is a copy of the original holy image) and the Madonna Addolorata, transferred to Piazza del Gesù in the late 19th century.