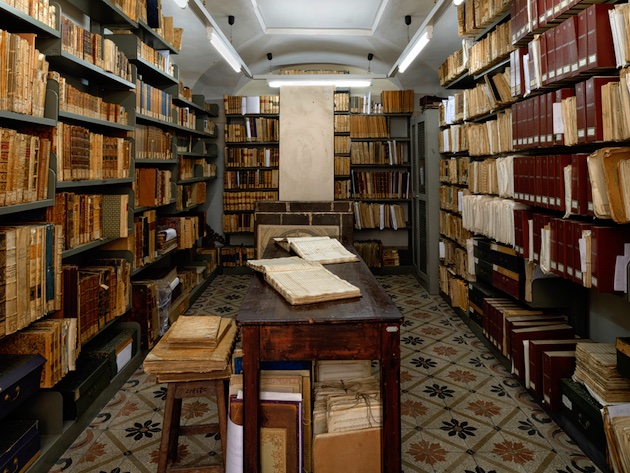 The Conservatory of Music Santa Cecilia is one of the oldest musical institutions in the world, whose historical roots are identified with those of the ancient Vertuosa company of musicians which later became the Congregation of Musicians of Rome under the invocation of Santa Cecilia (1565). The birth of the first nucleus of the music school is due to Giovanni Sgambati, pianist and composer of international fame, pupil of Liszt and teacher who, in 1869, obtained the concession of a place in the Academy's headquarters where he could teach free piano courses reserved for poor students. After the breach of Porta Pia (1870) and the annexation of Rome to the Kingdom of Italy, the Congregation of Santa Cecilia was secularized, becoming the Royal Academy of Santa Cecilia. The Music School became a Lyceum of Music to which the Academy Library was annexed.

As a large hall was needed for academic events, essays and exams at the Lyceum, in 1881 the project to build it was entrusted to the architect Pompeo Coltellacci. With its 795 square meters and 14 meters high it was the largest concert hall in Rome; equipped with a large organ, built by the E.F. Walcker of Wuttemberg, and with perfect acoustics it could hold, according to the reports of the time, 1200 seated and standing spectators. In 1911 the Lyceum of Music became an autonomous moral entity and in 1919 it was nationalized thus separating itself definitively from the Academy. Subsequently, the Lyceum took on the current name of the Conservatory of Music of Santa Cecilia.

Inside the Conservatory is the Santa Cecilia Government Music Library, which is made up of various collections and includes many autographed writings and scores by important musicians. In addition to those of Vincenzo Bellini, Felix Mendelssohn-Bartholdy, Franz Liszt and Giovanni Pacini, we recall some choir particles written by Pierluigi da Palestrina. The Library is also home to the International Institute of Musical Documentation (ISIDOMUS). The Institute has as its purpose the promotion of musical culture and the protection and enhancement of the bibliographic-musical heritage.