Nymphaeum of the Villa dei Quintili 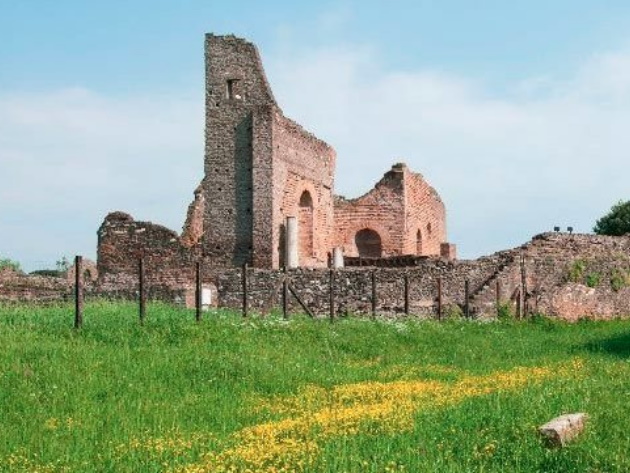 The monumental two-storey nymphaeum overlooking Via Appia Antica, was the real entrance to the Quintili villa : from here, in fact, through a door that stood between two columns there was the entrance to the park and then, through some avenues, the hippodrome can be reached.

The structure, formed by a large hemicycle with a niche at the bottom, was flanked by two thermal rooms with jets of water that were collected in a central basin of which there are some remains nowdays. The elegant floor, of which only some traces are visible, was in large white mosaic tiles.

The part dating back to the period of Emperor Commodus (161-192 AD), is in opus listatum, with alternating rows of bricks and tuffs. The covering of the exedra, on the other hand, was in polychrome marble. Among the statues and marble decorations that adorned the area, a statue of Hercules was found that perhaps stood inside a small temple.

In front of the nymphaeum some columns formed a sort of "propylaum" (front porch), of which only the column remains next to the current entrance and a small pillar; the entrance was also made up of three monumental passages that led to the nymphaeum. The latter was covered with marble, decorations and statues.

Today, the original appearance of the nymphaeum has completely changed, due to the modifications it underwent during the medieval ages that transformed it into a small castle owned by the counts of Tusculum, who between the ninth and eleventh centuries, were thelords of Lazio. Later, it passed to the Astalli or probably to the Castani families.

At the top left there was a lookout tower that controlled the traffic along the road. Even today, around the nymphaeum you can still see a long solid wall on top of which the canal, originally covered, for the aqueduct that fed the nymphaeum was crossed.