The night shines at the Baths of Caracalla 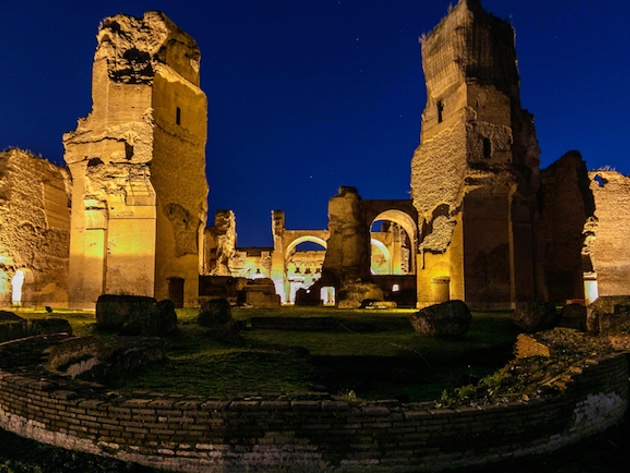 The Baths of Caracalla reveal their mysteries thanks to the evening openings of the archaeological complex promoted by the Special Superintendence of Rome. A unique opportunity to visit not only the imposing ruins under the starry sky, but also to descend into the basement and into the Mithraeum (the largest in the Roman world), to discover the domus of the Hadrian age, recently opened to the public and to admire the exhibition Idee di pietra (Ideas of stone), with the four works of the contemporary artist Giuseppe Penone placed in the large natatio of the Baths together with Michelangelo Pistoletto's Mela Reintegrata.

The domus of the Hadrian age, in particular, consists of a large frescoed room with two superimposed decorations visible today: one represents architectural perspectives populated by human figures, statues, rampant felines while the other, about fifty years later, is decorated with figures of divinities of the Greek-Roman and Egyptian pantheon. Defined since ancient times magnificentissimæ and eximiæ, the Baths, built by Emperor Caracalla in the third century AD, represented a huge complex with gyms, swimming pools, saunas, which could accommodate up to 8000 people a day, and they were decorated with marbles, mosaics and famous statuary groups such as the Farnese Hercules and the Farnese Bull, now in the Archaeological Museum of Naples.

Five evenings to rediscover this hidden jewel with a visit itinerary that therefore reserves many fascinating novelties. Info and reservations on the Coopculture website.