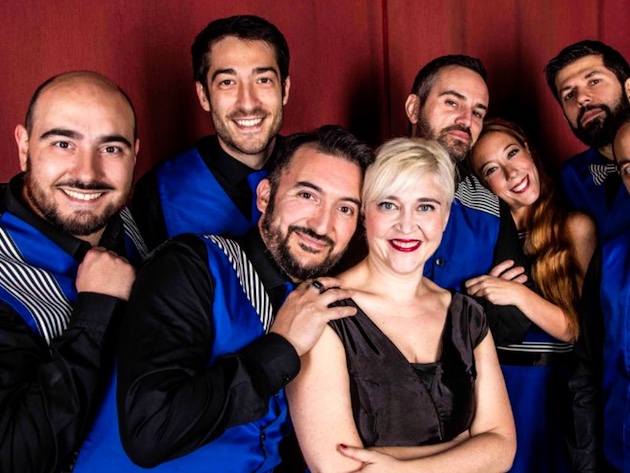 B.L.U.E., the completely improvised musical that takes its cue from the music and the typical way of narrating Broadway, is staged at the Brancaccio Theater. The show, conceived by the Bugiardini company, one of the most famous in Italy for theatrical improvisation, and by the musicians who accompany them live, changes every evening, thanks to the suggestions and wishes of the public. Based on the latter, in fact, the actors and musicians on stage invent a completely new and original musical, giving life to always different stories, unusual characters, incredible choreography, funny jokes and exciting songs. In the show, everything is created on the spot or, as the Anglo-Saxons say, out of the blue: hence the title. This new and fun musical formula, where spontaneity and comedy mix in an admirable way, has had enormous success not only in Rome in three seasons awarded by continuous sold out every evening, but also in numerous theaters throughout the country. The improvised musical is a very popular genre of success in Anglo-Saxon countries that I Bugiardini, thanks to a long experience in this field, have decided to represent also in Italy, and thus be actors, singers, composers and dancers at the same time.

The Bugiardini group was formed in 2008 from the union of actors of heterogeneous extraction but united by a passion for improvisation theater. They have conceived and produced many original formats of theatrical improvisation, such as “Shhh - an improvised silent movie” presented in several editions of the Edinburgh Fringe Festival; they have also been guests at the most famous improvisation theaters, such as the Loose Moose Theater (Calgary, Canada) and the Second City (Chicago, USA).