The mosaic of the “Real Casa” 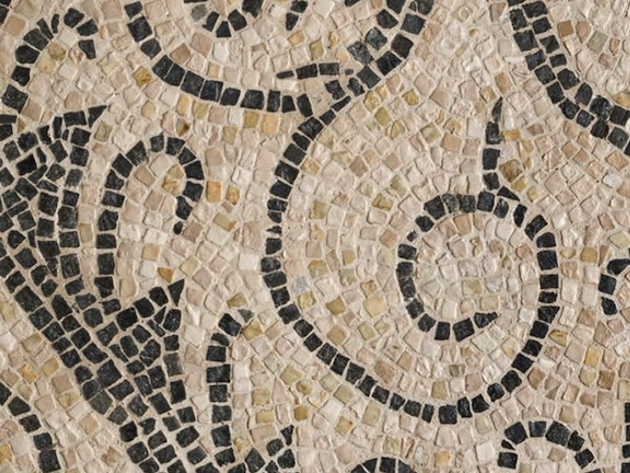 The exhibition at the Centrale Montemartini presents a restored mosaic from the imperial Roman era. Discovered in 1900 in a fragmentary state in the area between the Ministry of the Royal House and the garden, near the current Quirinale Garden, the mosaic dates back to the mid-third/early fourth century AD. and was part of a larger floor mosaic.

The surface is decorated with vegetable spirals that come out of kantharoi, vases with high handles, placed in the corners and in the center of the long sides of the floor and a four-petal flower with small lanceolate leaves inserted within a polychrome frame. The excavations revealed that the large room paved with this mosaic, with the original surface of 8.40 x 6.70 meters, was the representative room of an aristocratic domus of the late imperial era. In this period, for mosaics, geometric decorative themes or those related to the world of nature were preferred, instead of mythological themes or scenes of everyday life more widespread previously.

The fairly complex restoration operations involved cleaning and plastering the mosaic surfaces and allowed their conservation. In the exhibition, the restored fragments, which do not fit together, were placed on a large walkable carpet made of linoleum, where the decorative motif of the mosaic is reproduced on a 1: 1 scale. This graphic reconstruction allows visitors an overview of the work, with the aim of restoring what has been lost.

To complete the didactic apparatus, a tactile panel was also created complete with captions in Braille for the blind and visually impaired, on which the floral motif of the polychrome mosaic panel is reproduced in relief. Thanks to a QR code applied to the panel, visitors can listen to an audio track that completes the perception of the mosaic on display.