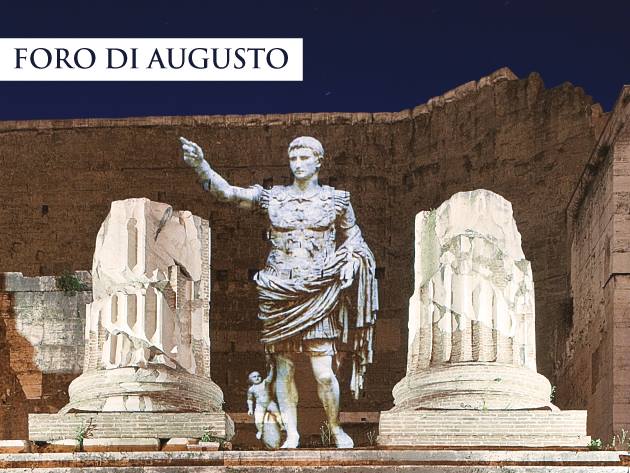 After last few years successes, the engaging history of the Forum of Augustus is back with "Viaggio nell'antica Roma" (Journeys through Ancient Rome) the outdoor multimedia show available in 8 languages. Until 8 November, the extraordinary project, curated by Piero Angela and Paco Lanciano, returns with three shows every evening.

Seated in the grandstand in via Alessandrina, the audience enjoys an immersive experience and, at the same time, a rigorous scientific and historical reconstruction, accompanied by the narrative voice of Piero Angela and films and projections recreating the place as it appeared in ancient Rome.

The show - available in Italian, English, French, Russian, Spanish, German, Chinese and Japanese and with three 40-minute repeats every evening - takes place in compliance with the anti-Covid-19 prevention measures: contingent entrance (max 50 people per show), temperature measurement, use of audio guides protected by a disposable casing and disposable earphones, interpersonal spacing of one meter with predetermined placeholders in the stands.

Tickets can be pre-purchased online on the official website or calling the contact centre 060608 (active every day from 9.00 to 19.00). They can also be purchased on the spot, after completing the form with the visitor's personal data and in the Tourist Infopoints currently open to the public. A reduced entrance ticket is available for MIC Card and Roma Pass holders.

The story begins with the marbles still visible in the Forum. Through a multi-projection of lights, images, films and animations, Piero Angela's narration focuses on the figure of Augustus, whose gigantic statue, 12 meters high, was kept next to the temple dedicated to Mars Ultor. With Augustus, Rome inaugurated a new period in its history: the imperial age represented the time of the rise. In just over a century, it led the city to reign over an empire extended from current England to the borders of present Iraq, including most of Europe, the Middle East and all of North Africa.

After Augustus, moreover, other emperors such as Nerva and Trajan left their mark in the Imperial Fora by building their own Forum. Rome at that time had more than a million inhabitants: no city in the world had ever had a population of that size. It was the great metropolis of ancient times: the capital of economics, law, power and fun.

The project, which is part of ROMARAMA, the new program by Roma Capitale, is promoted by Roma Capitale, Assessorato alla Crescita culturale - Sovrintendenza Capitolina ai Beni Culturali and produced by Zètema Progetto Cultura.

Conceived and curated by Piero Angela and Paco Lanciano with the historic collaboration of Gaetano Capasso and  Direzione Scientifica della Sovrintendenza Capitolina.