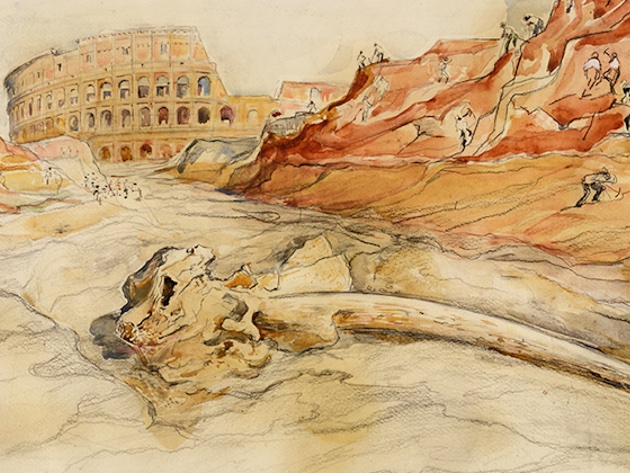 The exhibition at the Trajan's Markets, which tells the story of the now lost hill of Velia and "its" elephant, presents about 100 works, including archaeological finds, graphic projects, art objects and videos, some exhibited for the first time. 90 years after the discovery, the fossil remains of an elephant (Elephas antiquus) found at the base of the Velia hill have been restored. The intervention was an opportunity to offer visitors a set of works, which shed new light on a sector of the archaeological area of ​​the centre of Rome affected in the 1930s by destruction and deep urban transformations.

Between 1931 and 1932 in fact, a hill was excavated, the Velia, which extended between the slopes of the Oppio hill and the offshoots of the Palatine, separating the area of ​​the Imperial Forums from the Colosseum. The intervention was born on the one hand, from the need to connect Piazza Venezia, Via Cavour and the new districts of Celio and Esquilino, on the other hand, allowing the construction of a monumental road that, starting from Piazza Venezia, reached the Colosseum. It was a scenic route, flanked by the monuments of the ancient city that were gradually recovering with the demolitions of the Alessandrino district, which began as early as 1924. The new city artery took the name of via dell’Impero (the current via dei Fori Imperiali) and was inaugurated on 28 October 1932 on the occasion of the celebration of the tenth anniversary of the March on Rome, thus becoming the place par excellence for the regime's parades.

The damages suffered by the artistic and archaeological heritage, due to this excavation, were very huge, starting with the almost total dismantling of the garden of Villa Rivaldi, which extended on the top of the hill up to the back of the Basilica of Maxentius, up to the destruction of the archaeological stratification, which proved to be very rich in evidence from the Roman era, in particular the remains of a domus with well-preserved frescoes and many statues. But perhaps the most unexpected discovery occurred in May 1932, when numerous remains of fossil fauna were brought to light, among which the elephant skull and tusk Elephas (Palaeoloxodon) antiquus constitute the most famous find. The recovery operations were carried out with great speed: the Elephas, removed in great haste, was then transported to the Municipal Antiquarium of Celio, where it was later forgotten.

The exhibition is divided into four sections in which some important stages in the history of the hill are illustrated: the excavation work with the architectural arrangement projects and the methods of collecting the archaeological materials found; the monumental complex of Villa Rivaldi, heavily damaged by the works; the archaeological evidence of a rich domus which remained in use for a long time in the imperial era; the discovery of the important remains of the Elephas antiquus.