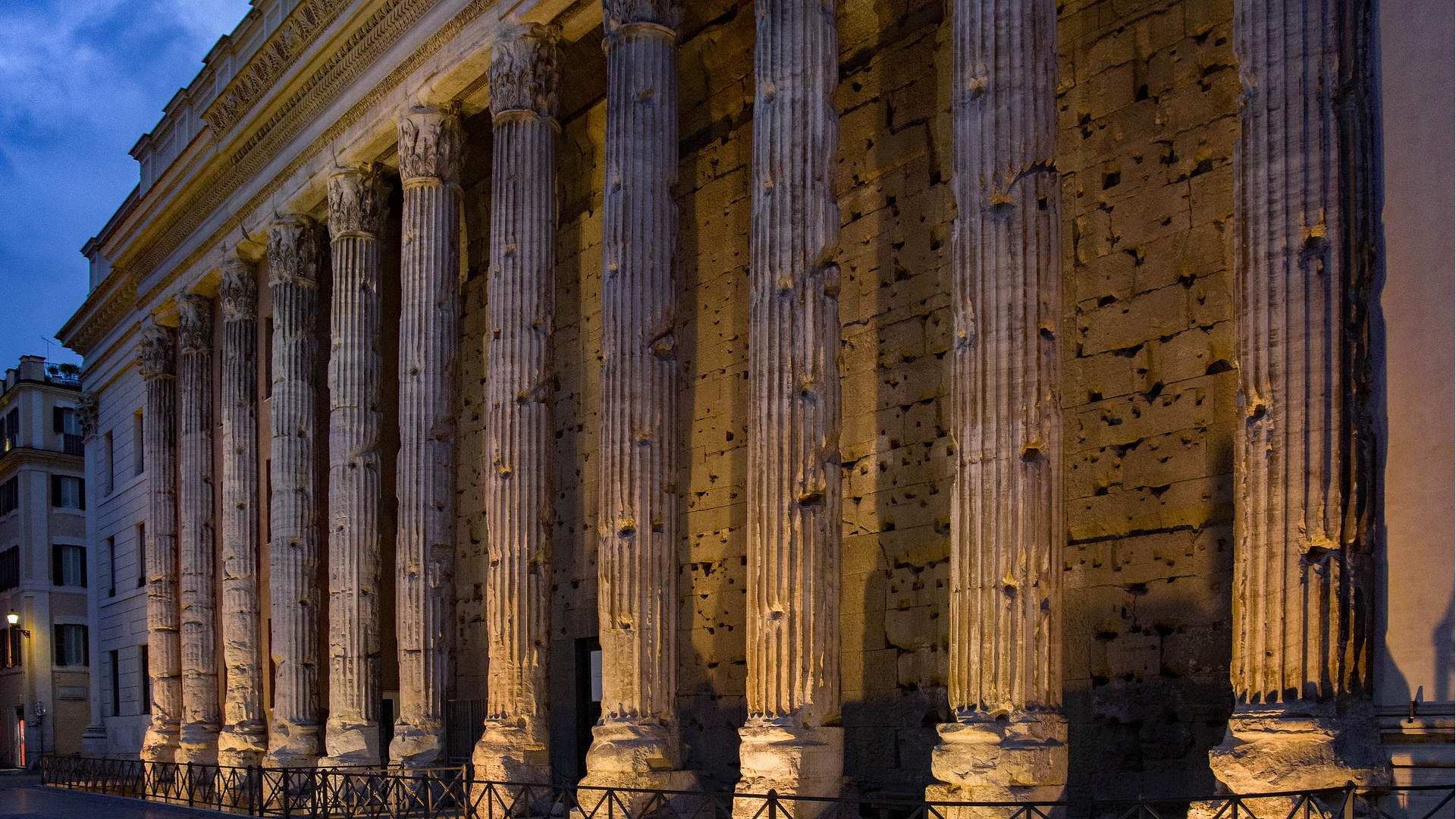 Probably, the construction of the building was commissioned by Emperor Hadrian who intended to dedicate it to his wife Vibia Sabina, who died and was then deified in 136. However, the works were concluded, around 145 A.C., by his son and successor Antoninus Pius who dedicated it to the deified emperor Hadrian.

The temple consisted of eight columns along the short sides and thirteen on the long ones; it rose on a high podium accessible from the east side through a staircase. The largely restored architrave has a rich decoration with small palm trees and lion heads. The interior consisted of semi-columns resting on high plinths decorated with reliefs depicting the personifications of the Roman provinces. These reliefs are nowadays kept in the Musei Capitolini and in the Museo Archeologico Nazionale di Napoli.

In 1695, Carlo Fontana incorporated the remains of the temple in the Palazzo della Dogana di Terra, for goods arriving in Rome by land.

In 1831, the building housed the headquarters of the Rome Stock Exchange.

In 1873 the building was bought by the Camera di Commercio which made it its seat. The renovation works were carried out by Virginio Vespignani.

Today, only a part of the north side colonnade with eleven columns 15 meters high and a diameter of 1.44 meters is still preserved.

Inside the Sala delle Grida of the former Stock Exchange, you can witness the spectacular journey through time, thanks to Hadrianeum, the 22-minute video made by scientific popularizer Paco Lanciano, and live an immersive experience in Ancient Rome. Hadrianeum is an actual immersive projection on the floor, walls, and ceiling that makes you retrace the events that have taken place in the temple and the surrounding area, a mirror of the overall evolution of the city of Rome. An original projection system gives you the illusion of flying over the city in different eras and moving within monuments, palaces, churches, and squares. A narrator accompanies you in the story, thanks to an audio guide in eight languages.

Furthermore, on the splendid Piazza di Pietra, which the Temple overlooks, every evening, at nightfall, you can experience twelve minutes of intense emotions with Luci su Adriano. The Temple colonnade lights up thanks to the play of lights, sounds, and images created by Paco Lanciano, physicist, scientist, and great popularizer of Roman history. He has already put his signature on other successful multimedia shows in the Capital. Through the use of six synchronized projectors, the fascinating multi-projection reconstructs the birth, destruction, dispossession, and reuse of the temple until it becomes the seat of the Chamber of Commerce.

The momument can be seen from the outside.

Open during cultural events or exhibitions.