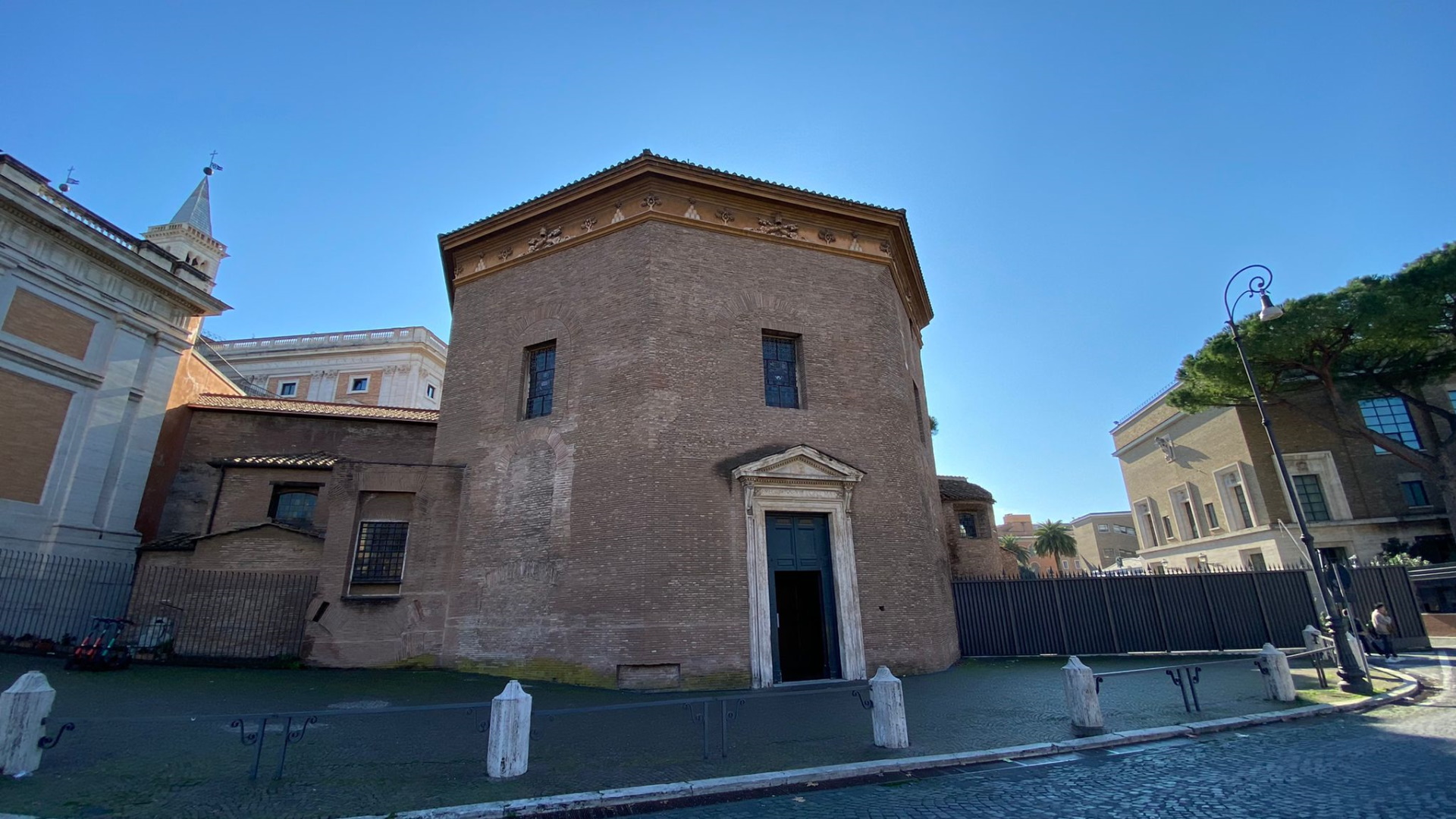 It is the oldest monumental Baptistery, whose title is S. Giovanni in Fonte. It was built in the 4th century by Constantine, together with the Basilica of Saint John Lateran, on a 1st-century villa and a 2nd-century thermal building, as a place of worship for the Christian community. Later, it was modified and restored by various interventions. The Baptistery has always been active and with a central role in the life of Christian Rome. It was an integral part of the Lateran complex and the residence of the Pontiffs.

The external frieze, dated 1657, is decorated with the Chigi family coat of arms and is the work by Francesco Borromini. Of particular interest is the ancient entrance with a fragment of Roman architrave. The interior has an octagonal plan. In the centre is a ring of eight porphyry columns with Corinthian capitals, supporting an architrave. Above is the second order of smaller columns in white marble. In 1054, the ancient portico of the Baptistery was transformed into two chapels: the chapel of Saints Rufina and Seconda and the Chapel of Saints Cipriano and Giustina, inside which, in a small apse, there is a mosaic of the 5th century.

On the walls, modern copies of artworks by Andrea Sacchi with stories of John the Baptist and frescoes with Constantine's stories by Andrea Camassei, Giacinto Gimignani and Carlo Maratta. At the centre of a 16th-century circular enclosure is the baptismal font: a green basalt urn covered with bronze by Ciro Ferri. In ancient times, seven silver fountains in the form of deer adorned the font; later stolen by the barbarians, they are today recalled by two bronze deer statues in the act of drinking at the source, placed in 1967 by Pope Paul VI.

During the pontificate of Ilaro (461 - 468) the Baptistery was embellished with three chapels on three sides: the chapel dedicated to St. John the Baptist, on the west side, has an oval shape and a dome vault. Above the altar, is a tabernacle made of two fluted spiral columns, with golden bases and capitals, and a white marble architrave.The chapel of the Holy Cross, on the north side, was eliminated in 1586 by Sixtus V to build the loggia on the northern facade; the chapel on the east side, dedicated to St. John the Evangelist, has its original Greek cross shape with a central mosaic. At the entrance, the bronze doors built at the end of the 12th century by Pietro and Uberto from Piacenza. In a niche on the altar is a bronze statue of the saint, made in 1772 by Luigi Valadier. On the vault and the walls, there are late mannerism frescoes.

Particularly remarkable is the Chapel of San Venanzio with a 16th-century wooden ceiling and Byzantine mosaics. In the centre of the ceiling is an oval depicting the Assumption of the Virgin with stars. The tympanum and the cardinals' sepulchres are by Carlo Rainaldi. The sculptures are by Jacopo Antonio Fancelli, pupil and assistant of Bernini, and the portrait and putti by Paolo Naldini.