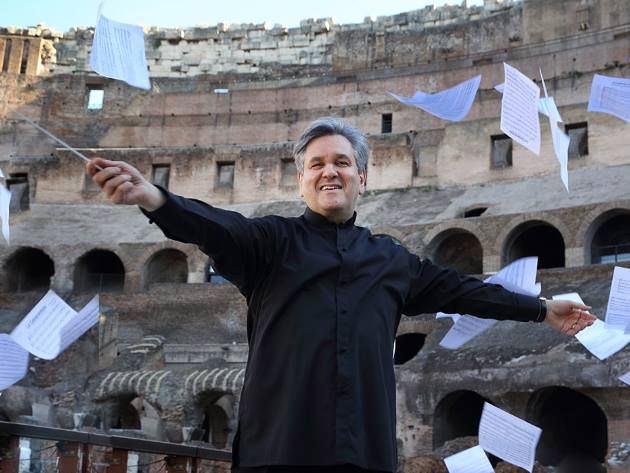 Digital Theatre - Teatro dell'Opera di Roma 2020-2021 Season: Streaming on operaroma.tv, the official YouTube channel, symphonic concerts, conducted by prestigious "batons", operas and ballets interpreted by great soloists, with the choir, orchestra, and corps de ballet of Teatro dell'Opera di Roma, and interviews and highlights to enjoy the wonderful opera world. On the ITsART platform, available in streaming on-demand, Giuseppe Verdi's masterpieces, conducted by Riccardo Muti and staged in 2013  − Ernani, Simon Boccanegra, and Nabucodonosor − I Puritani, conducted by Roberto Abbado and performed by an international cast, and the 2020 symphonic concerts with music by Bach, Ravel and Stravinskij, conducted by Daniele Gatti, Gluck, Mozart and Strauss' music, with the conduction of Michele Mariotti, the wonderful 2021 New Year's Eve Concert with Roberto Abbado conducting the Orchestra on the notes by Pëtr Il’ič Čajkovskij, and "Vi piace Brahms?", with which the Choir of the Teatro dell'Opera di Roma pays homage to the German composer, pianist and conductor of the late Romantic period. Two ballets are also available in streaming: the suggestive "E una sera ... Chopin", with the choreography of Giorgio Mancini, and "Pandora", the new and contemporary creation of the choreographer Simone Valastro.

Accademia Nazionale di Santa Cecilia: the ancient musical institution, directed by Sir Antonio Pappano, offers the public the accessible streaming symphonic concerts. On Facebook, all the updates about the new concerts. On the YouTube channel, available the collection of all the videos of the Academy. Available on demand: Belcanto Gala, a tribute to Bellini and Donizetti's opera, conducted by Antonio Pappano and interpreted by the soprano Lisette Oropesa and tenor Xabier Anduaga, with choirs and duets from Lucia di Lammermoor, Don Pasquale, La fille du régiment, La Sonnambula (The Sleepwalker), L'Elisir d'amore (The Love Potion), Lucrezia Borgia, I Puritani (The Puritans); Dante 700 for the 700th anniversary of the death of Dante Alighieri; the concert performed by Antonio Pappano and Stefano Bollani with music by Gabrieli, Vivaldi, Stravinskij and Mozart; the Elias by Mendelssohn, conducted by Antonio Pappano; In streaming on ITsART, Sir Antonio Pappano conducts the Orchestra in two extraordinary 2021 concerts: Felix Mendelssohn's Violin Concerto, Maxim Vengerov performing violin, and Carl Philipp Emanuel Bach's Symphony Wq 183 n. 1.

Vivaldi: The Four Seasons - Luka Šulić: streaming on ITsART, the award-winning cellist performs one of the most iconic works of classical music for his first independent recording project together with the Strings of the Academy of Santa Cecilia in Rome, directed by Maestro Luigi Piovano, himself a cellist and musical director of the chamber ensemble and the renowned Orchestra of the National Academy of Santa Cecilia.

Cosmoconcearth: exclusively on ITsART, the extraordinary show with the jazz notes by Gavino Murgia and Sainkho Namtchylak with which the staircase of the National Gallery of Modern and Contemporary Art was transformed into an open-air stage, on the occasion of Rome Music Festival and the inauguration of the Cosmowomen, Places as Constellation exhibition.

Fiorella Mannoia: the great Italian interpreter concert held at the suggestive Roman Theatre in Ostia Antica on last 26 June. The singer performed in two different and exciting sets: “Piano e voce”, with the best-known songs of her career and the masterpieces of the great authors, accompanied by Danilo Rea; guitars and strings, with which Mannoia reinterprets other great hits in unreleased versions.

Claudio Baglioni: in streaming on the ITsART platform, "In questa storia che è la mia", the concert of  the extraordinary Italian singer-songwriter performed on 2 June from Teatro dell'Opera di Roma. The pop-symphonic-contemporary opera, from his latest album of unreleased songs opens with an evocative monologue - interpreted by Pierfrancesco Favino - and a prelude danced by the étoile Eleonora Abbagnato. On the stage, the Orchestra, the Chorus and the Ballet Company of the Teatro dell'Opera, together with 188 musicians, choristers, singers, dancers and performers.

Viva Verdi: the concert for cello, accordion, and string orchestra of the Nuova Consonanza Association, recorded at the Academic Hall of the Santa Cecilia Music Conservatory in Rome for the 120th anniversary of the death of Giuseppe Verdi, is in free streaming on the ITsART platform.

Veni Domine - Voices of Advent and Christmas in the Sistine Chapel: streaming on ITsART, the evocative concert of 2017 with the ancient choir of the Sistine Chapel performing the most important and vast collection of manuscripts of sacred music in the world, kept in the Vatican Library.

Tribute to Ennio Morricone: a series of musical events dedicated to the masterpieces of the great composer, with Leandro Piccioni and Quartetto Pessoa. Five videos of the concert of the Madrid 2020 Italian Film Festival opening night at the Rome Forum Music Village on 26 November 2020, on the official YouTube channel of the musicians. Videos available: Once Upon a Time in America; Cinema Paradiso; Once Upon a Time in the West; The Ecstasy Of Gold.

Roma Jazz Festival 2020: two extraordinary concerts from the last edition are available in streaming on-demand on the ITsART platform. Area Open Project - the musical ensemble born around the figure of Demetrio Stratos, with their latest album Live in Japan. Pasquale Mirra/Hamid Drake - the suggestive duo born from a chance and lucky encounter, with Mirra on the vibraphone and Drake on drums, frame drum and vocals.