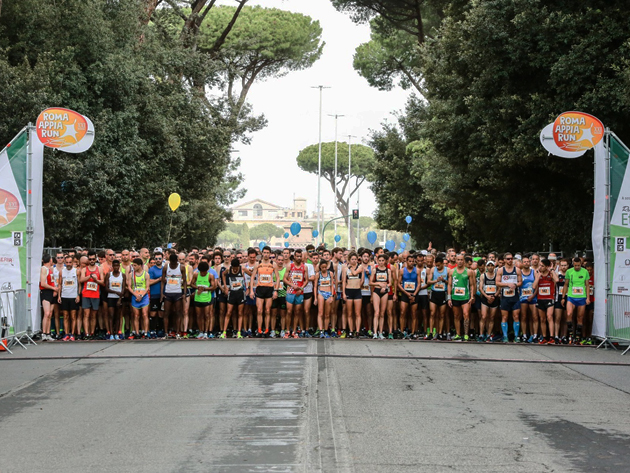 A special edition for the Appia Run, which, in its XXII edition, celebrates the 60th anniversary of the Rome Olympics and the epic victory in the Olympic Marathon of Abebe Bikila, famous for having run barefoot for the whole duration of the race.

The only race in the world taking place on 5 different pavements (asphalt, sampietrino, lava paved, dirt and the track of the Nando Martellini Stadium at the Caracalla’s Baths), has already exceeded the 1000 enrolled about 200 days from the beginning.

This year we start from Via di San Gregorio and continue in the splendid scenery of the Appia Antica, Via di Cecilia Metella, Via Appia Pignatelli, Vicolo Sant'Urbano, Via della Caffarella, Viale di Porta Ardeatina, ending finally at the Stadio delle Terme di Caracalla.

The event includes four races: competitive (Km.14), reserved for FIDAL members, Sports Promotion Bodies recognized by CONI and holders of RUN CARDs; non-competitive (km14), non-competitive (Km. 5), open to all and finally Fulmine of the Appia, with speed races on the Track of the Caracalla’s Baths, for children from 3 to 16 years.