New cultural spaces and further opportunities enrich the already excellent offer of Estate Romana. For four months and in addition to the program of the city's cultural institutions, the Roman summer container presents the 65 winning projects of the public notice for the free concession of open spaces for cultural activities.

THE NOTICES AND THE WINNERS

Until 28 June, cultural operators can participate in the public notice to expand the cultural offer for citizens and tourists between 30 July 30 and 3 October. Furthermore, for some cultural realities in the city, the Municipality has provided a call through which to offer, for temporary periods and free of charge, the spaces of the Capitoline Bodies such as the Azienda Speciale Palaexpo, Casa del Cinema, Casa del Jazz, Teatro dell'Opera di Roma, as places in which to carry out rehearsal sections, laboratories, seminar meetings, with the exclusion of public entertainment.

Important proposals were selected, such as Village Celimontana, the open-air Jazz Club where you can enjoy international musicians perform live every day. Among the genres, Jazz, Soul, Dixieland, Swing, Acoustics, and Rock'n Roll.

Villa Ada Rome meets the world, the historic musical festival, on whose stage it sees the presence, from mid-June to mid-August, of great international names and the best of Italian songwriting and indie. The title of this 27th edition is La musica che cura.

CINEMA UNDER THE STARS

Cine Village Parco Talenti, which, until the beginning of September, offers great classics and cinematic novelties of recent years and meetings with the great characters of the world of cinema to explore themes, releases, projects, backstage stories.

Until mid-September, Arena Garbatella brings the best films of the season to Piazza Benedetto Brin and evenings dedicated to theatrical performances and screenings with live music.

Caleidoscopio in Villa Borghese, which, from mid-June, in the Ettore Scola open-air theater, starts with the free summer programming of the Casa del Cinema. On the bill, the great international cinema, stories, and characters, music between opera and ballet, story of reality with the documentaries of the Istituto Luce and cine-biopics. Eight reviews, eight festivals, and many guests for a total of 91 consecutive evenings.

THE OUTDOOR READING AND STUDY ROOMS

Summer in the Library kicks off in the gardens of the Libraries of Rome on 21 June with the Festa della Musica, with live shows, workshops, themed book presentations, many appointments for the little ones, including workshops and outdoor readings. In the evening, a rich program of cultural events awaits you.

On 21 June, for the whole day and in several city areas, free music to play together, in the name of love for notes and the joy of sharing with the Music Festival. If you want to share your music, register for free on the website www.culture.roma.it/festadellamusicaroma, by midnight on June 17th.

From 30 June to October, the new season of the Gigi Proietti Globe Theater Silvano Toti, the Elizabethan theater of Villa Borghese just named after its unforgettable director, will be staged with great plays such as Romeo and Juliet, Falstaff and Faust.

Also at the Auditorium starts the review Si può fare, which sees, in the Cavea, the performances of the great names of Italian and international music such as Emma, ​​Niccolò Fabi, Edoardo Bennato, Fiorella Mannoia, Gino Paoli, Nicola Piovani, Pierò Pelù, Max Gazzè, Fabrizio Moro, Robben Ford and Bill Evans, Noa, and some of the artists most loved by young people, from Myss Keta, Motta, ColapesceDimartino, to Willie Peyote, Ghemon, Lo Stato Sociale.

Furthermore, from 6 July, the Summer Concerts of the National Academy of Santa Cecilia await you with six special concerts with the Academy Orchestra and Choir and performances and tributes to Stravinskij, Gershwin, and the genius of Sebastião Salgado.

From 15 June to 6 August, the Teatro dell'Opera di Roma moves to the Circus Maximus with the new staging of Verdi's Il Trovatore under the direction of Daniele Gatti, Verdi's Messa da Requiem, Madama Butterfly, La bohème by Puccini, Swan Lake, the gala of Roberto Bolle, and Vinicio Capossela, who performs with the Maderna Orchestra.

From 14 September to 21 November, the Romaeuropa Festival returns in its 36th edition with an international program that comes alive with the inauguration of the Möbius show, the XY acrobats, and the choreographer Rachid Ouramdane in the Cavea of ​​the Auditorium Parco della Musica.

At Palazzo delle Esposizioni, the 2020 FUORI Quadriennale of art continues until 18 July with the exhibition of more than 300 works by 43 artists, presented through monographic rooms and new compositions.

Pavilion 9A of the Mattatoio hosts the 64th edition of the World Press Photo until 22 August.

There are many initiatives promoted by Roma Culture, the Capitoline Superintendence for Cultural Heritage: starting with the exhibitions in the civic museums, including The Torlonia marbles. Collecting Masterpieces in the new exhibition space of Villa Caffarelli, Koudelka. Radici at the Ara Pacis Museum, Napoleon and the myth of Rome at the Trajan's Markets-Museums of the Imperial Forums, the second edition of Back to Nature. Contemporary Art in Villa Borghese, with in situ installations by internationally renowned artists, and Rome. Birth of a Capital 1870 -1915 at the Museum of Rome.

On 18, 19, and 20 June, the European Days of Archeology have the objective of making archaeological assets known to the general public.

From 17 June, Journeys through Ancient Rome, the open-air multimedia show to relive the history of the Forum of Augustus. Until 7 November. It includes three replicas every evening of the extraordinary project curated by Piero Angela and Paco Lanciano, available in 8 languages.

Do not miss the Circo Maximo Experience, the immersive visit of the Circus Maximus in augmented and virtual reality. From Thursday to Saturday, from 5 to 8 pm, you can relive the history of the largest building for the spectacle of antiquity.

The entire summer season continues with the initiative of the first Sundays of the month with free admission, for residents and non-residents, in the civic museums - with the masterpieces of the permanent collections and the numerous temporary exhibitions in progress - and in some archaeological sites in the capital.

The Estate Romana 2021 program is promoted by Roma Culture. Appointments may vary. For information and updates culture.roma.it 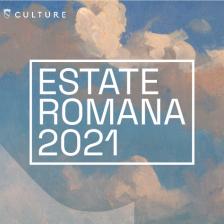