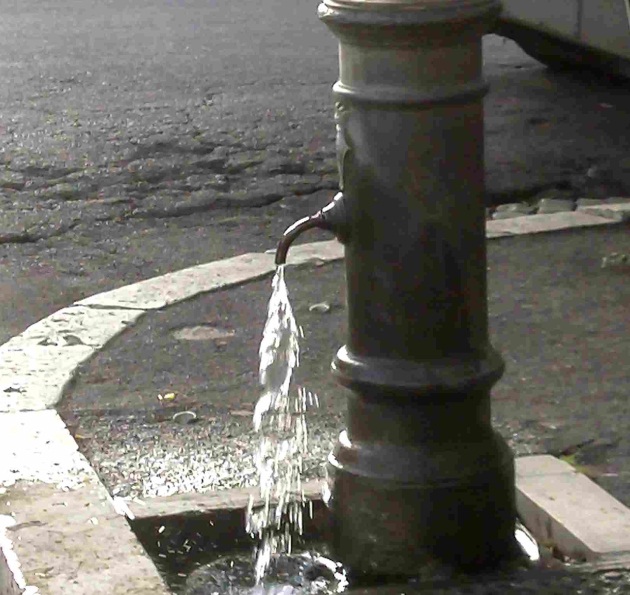 When the heat of the city becomes oppressive, nothing is more welcome than a sip of cool water.  Rome offers top quality water on the street.

In 1874, mayor of the Municipality of Rome Luigi Pianciani created a series of public drinking fountains.  At around 120cm high and built in cast iron with a weight of 100kg, the fountains were each fitted with three dragon-shaped spouts and are free to use. The water that flows from them ends up in the sewer, through a grate at street level.

The design of the fountains was modified in the years that followed, with the three decorated spouts being replaced with a single plain tube. The shape of the tube is behind the nickname of “big nose” (“nasone”) given to the fountains by the local Romans. A few of the dragon spouts can still be found in Piazza della  Rotonda, behind  the Roman Forum in Via di San Teodoro, and in Via delle Tre Cannelle. There are over 2,000 “big noses” in Rome, offering refreshment with the same water that is provided to homes; its constant flow making it very fresh indeed.

Rome also contains drinking fountains built in travertine that are known by the name “imperial wolves” because the water pours from brass wolf heads. These fountains were installed in the 1920s and 1930s, and around seventy remain in use, situated in the parks of Rome and the Olympic Village.

All the fountain spouts feature a small hole in the top. By stopping the main flow from the spout with your finger, the water will spurt upwards instead ‒ a little trick to make drinking easier and more hygienic.