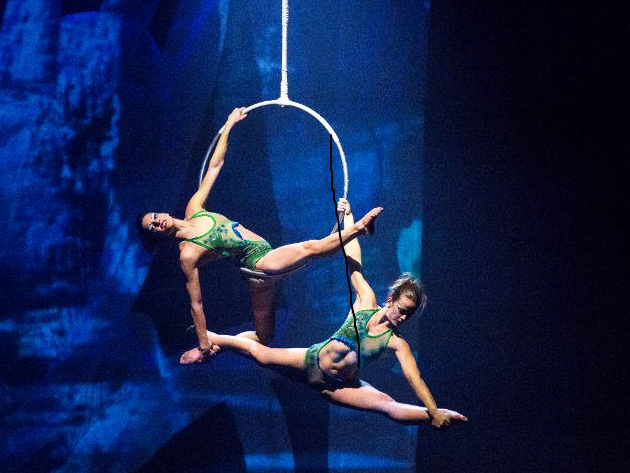 An acrobatic dance show by the Sonics company, set in the imaginary world of the Agharta valley, which is located in the bowels of the earth and whose inhabitants move with prodigious vaults, trying to represent their vibrations, deep rhythms and internal balances.

Here lives a hidden humanity, which has destroyed everything on the surface; the only one to guard its memories is the architect Serafino who hopes to return, driven by his faith, to nature and its regenerative power.

Challenging the force of gravity, Serafino invents new flying machines to make the "duum", that is the leap to the lost world above, to find its forgotten beauty. The sound and vibration of the "duum" encompass all the strength and energy needed to overcome the force of gravity and bring the last men back.

The Sonics, an Italian company of acrobats, was founded in 2001 by the will of the aerial performers, Ileana Prudente, choreographer and costume designer, and Alessandro Pietrolini, artistic director and author of the shows.

Their phantasmagoric shows, characterized by incredible aerial acrobatics and athletic performances, are always unique, thanks also to the choreographies which use machines and props of their own invention.

From their first theatrical tour in 2010, the Sonics tread the stages of all the most important theaters in Italy and the world with their shows. In addition, they take part in important international events, such as the Closing Ceremony of the 2006 Turin Olympic Games and the Inauguration Ceremony of the Kiev Olympic Stadium for the 2012 European Football Championships.