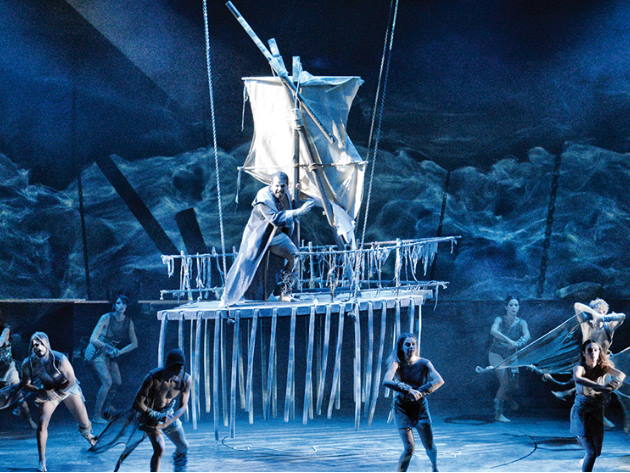 The Teatro Brancaccio hosts the first musical show based on Dante's poem, a journey through Hell, Purgatory and Paradise in search of love. The new production of the Divina Commedia Opera Musical is back with the dreamy direction of Andrea Ortis.

In the continuous succession of immersive sets by Lara Carissimi, acrobatic choreography by Massimiliano Volpini, compelling music by Marco Frisini, animated 3D projections and special effects, the show accompanies the audience on the most famous journey in history. The magnetic voice of Giancarlo Giannini, as a narrator Dante, reads the masterpiece like an animated book that gives life to the poet's fantasy.

Among stormy seas, petrified forests, frozen lakes, autumnal woods and heavenly scenarios, Dante moves accompanied by his master Virgil, meeting extraordinary characters on his way: from Charon to Paul and Francesca, from Pier delle Vigne to Catone, from Pia de' Tolomei to the poets Guinizzelli and Daniel and, finally, to the beloved Beatrice, the symbol of "Love that moves the sun and other stars", the only possible key to happiness.

Produced by Music International Company, the work boasts an exceptional creative team and an extraordinary cast: 9 singers-actors, 14 dancers-acrobats and over 50 professionals, 70 different scenarios with 3D effects and 200 costumes. The colossal production was also awarded the Gold Medal from the Società Dante Alighieri.