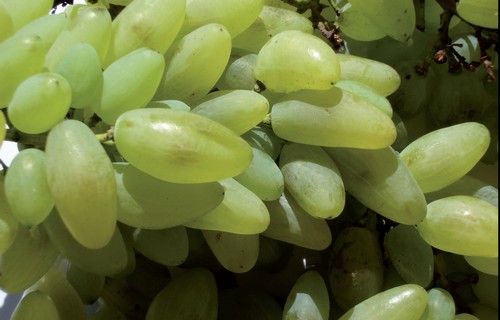 Fruit occupies a very important place in traditional Roman cuisine, featuring in many dishes. In her book “The Talisman of Happiness” (“Il Talismano della felicità”) Ada Boni divides it into four categories. Oily fruit includes almonds, hazelnuts, pine nuts, pistachios and walnuts, sour fruit in this season would be pears, apples, prunes, plums and watermelons, starchy fruit such as chestnuts, and sugary fruit, encompassing grapes and figs.   Throughout the extensive range of Rome’s fruit and vegetable production, one type of grape in particular stands out. Its scientific name is vitis vinifera, called Pizzutella di Tivoli in Italian and also known as uva corna, or ‘horned grape’ because of its elongated shape, of which Pliny the Elder provided the first botanical information in Natural History.

The specific environmental conditions of the roman countryside were so favourable to this plant that it was widely grown, predominantly in the white variety, and can still be found on market stalls mainly from the end of August to the beginning of September.   A traditional recipe in Roman cuisine is a typical mixed salad historically known as “insalata di misticanza”. Rejecting complicated processes in favour of simplicity, it is composed of different types of salad leaves including wild varieties gathered in the past from the vegetable gardens of Rome, to which were added the odd grape.   A well-known misticanza was regularly served up until the last century by Capuchin Friars who would bring some of their delicious mixed produce to the families of their benefactors when asking for offerings. This would have been composed of a fragrant variety of salad leaves such as French Scorzonera, Roman endive, opposite-leaved saltwort, wild endive, chervil, lamb’s lettuce, perennial wall-rocket and anise leaves.

To prepare
Wash the leaves well, dry and place in a salad bowl. Remove a few grapes from the stalks, rinse them, and add to the bowl. Dress with extra virgin olive oil and salt.