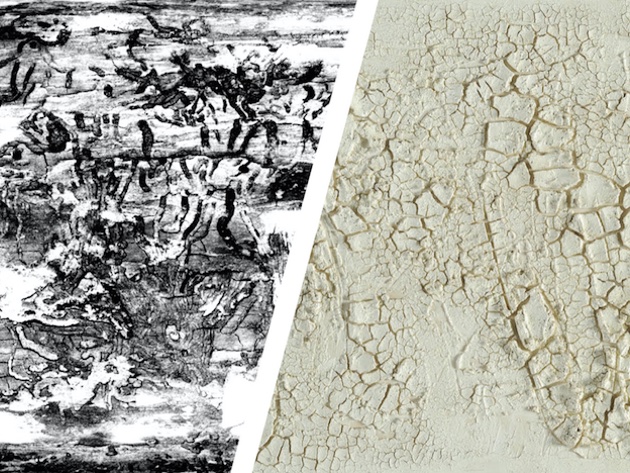 The Giacomelli | Burri. Photography and material imaginary at MAXXI shows the dialogue between an important selection of photographs by Mario Giacomelli dedicated to the landscape and some graphic and multi-material works by Alberto Burri, to highlight both the common affinities in the field of artistic research, and the relationship of mutual esteem that bound them.

The lives of the two artists have crossed several times over the years: the first meeting between the two takes place around 1966, the year in which Nemo Sarteanesi - painter and Burri’s friend  - casually meets Giacomelli in Senigallia. A consolidated relationship arises from continuous exchanges over the time, as evidenced by the dedications on the back of some photographs and documents in the exhibition; this link creates a reflection on both art and existence that has many points of convergence.

Among the photographs by Mario Giacomelli on display, the series Metamorphosis of the Earth, Awareness of nature and Stories of the Earth, for example, taken between the end of the 1950s and the 1990s, the plowed fields, the morphology of the territory of the Marche, the contrast between sky and earth give rise to a language of abstract geometries, which shows the work of man and his relationship with nature marked by time.

Alberto Burri's works are distinguished by the use of very different materials, such as burnt plastic and tars, and constant abstract research. In works such as Cretti (1971) or Combustions (1965), which in the course of the exhibition are exhibited alongside Giacomelli's photographs, the revaluation of poor matter leads to the transfiguration of the object, which was considered a waste, within a renewed poetry. Thus, for both artists, a representation of nature, matter and territory emerges, which starting from the physicality of the elements, reaches a reflection on the human condition and an idea of ​​landscape in which the external reality is a reflection of the internal one.

The exhibition, curated by Marco Pierini and Alessandro Sarteanesi, is part of an itinerant project.