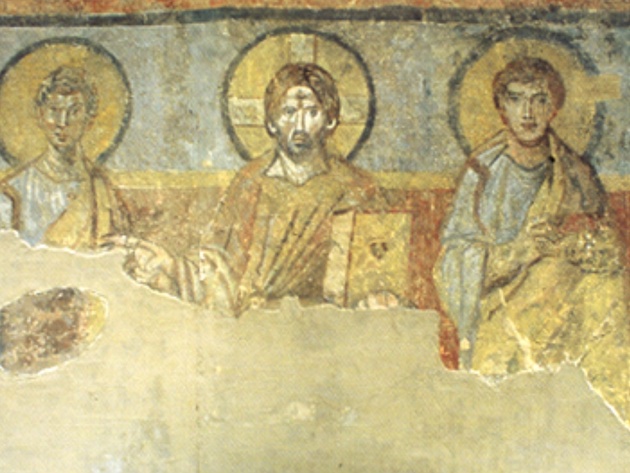 The basilica stands along via Portuense and was built at the behest of Pope Damasus - in the 4th century AD - within the catacombs of Generosa where the martyrs Simplicius, Faustina and Beatrice were buried.

The semi-underground place of worship, brought to light following archaeological investigations conducted during the second half of the 19th century, was a large building divided into three naves of different widths. It was conceived with an irregular plan to facilitate entry into the catacombs which occurred through the Introitus ad Martyres door, to the right of the apse.

Several tombs found inside testify that the basilica was also used as a burial place. Following its abandonment, which took place at the end of the sixth century, the remains of the martyrs were moved to the basilica of Santa Bibiana.

At the VI mile of the Via Portuense, along the right bank of the Tiber, on a hill later called Monte delle Piche, epigraphic sources testify to the existence of a pagan sanctuary dedicated to the goddess Dia: the priestly college of the Fratres Arvales was in charge of this ancient cult.

At a certain point, this hill began to be used as a pozzolana quarry, both underground and in the open. Probably between the end of the 3rd century A.D. and the beginning of the 4th century A.D., the quarry was abandoned and was used by the Christian community as a burial place, becoming the cemetery ad sextum Philippi or super Philippi, known as the Generosa catacomb. The martyrs Simplicio, Faustino and Beatrice were buried in the catacomb. Later Pope Damasus (366-384 AD) had a semi-hypogean basilica built, discovered by chance and excavated in the mid-19th century by G.B. De Rossi.

The entire basilica was brought to light in the 1980s by the Pontifical Commission for Sacred Archaeology: the excavations revealed a building of considerable size, measuring about 20x14 metres in width, leaning on three sides against the tufa bank of the hill that had been excavated for this purpose.

It was divided into three naves, of different widths, (it was accessible only from the west), with a sort of narthex on the front and an apse that was rather deformed and off-centre with respect to the longitudinal axis of the basilica, which was thus slightly oblique: this was precisely to fit the already existing tomb of the martyrs, buried in the catacomb. The floor was not found, but numerous pit tombs were found underneath it. Some of them were located near the apsidal area, in front of the altar: here masonry coffins, closed by marble epigraphs, which then served as the floor of the church itself, came to light. Two in particular can be dated to 382 and 394 respectively, which means that construction began during the Damasian period, or at least under Pope Damasus. The Damasian basilica retained its funerary function at least until the end of the 5th or beginning of the 6th century, after which it ceased to be used as such.