Church of San Lorenzo in Damaso 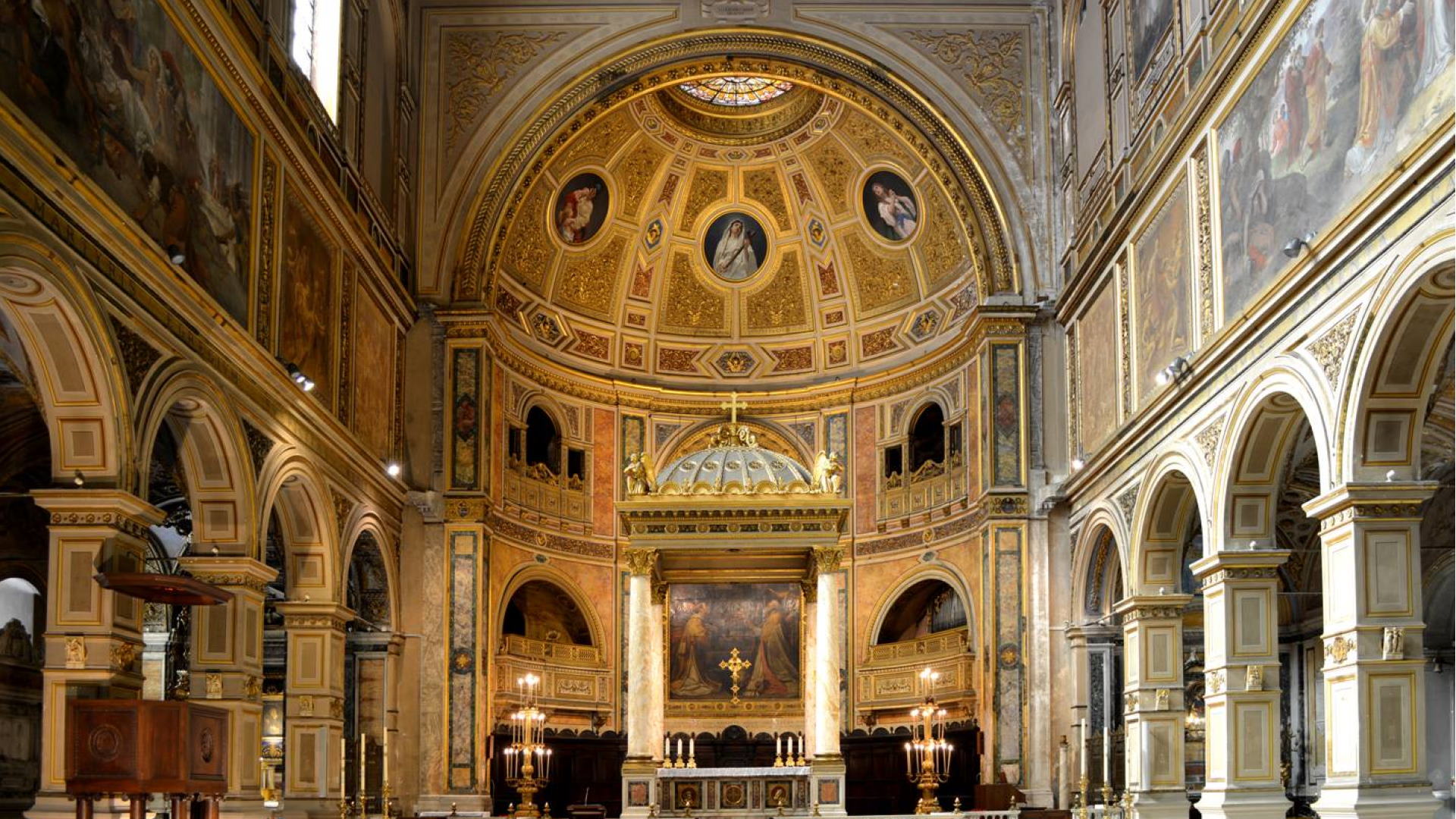 It is one of the most ancient Roman churches but it is also invisible from the street. The church has no façade because it is completely incorporated into the large fabric of the Palazzo della Cancelleria on the square of the same name that opens onto Corso Vittorio Emanuele II, a few steps from Campo de’ Fiori. The church is believed to have been founded in the home of Pope St Damasus, by the pope himself, at the end of 4th century; a restoration was undertaken by Pope Adrian I (who brought here the relics of Pope Damasus, ever since under the high altar) and by Leo III between the 8th and 9th centuries. At the end of the 15th century, the old basilica was completely rebuilt and slightly moved to the north, perhaps by Bramante, for the construction of Cardinal Raffaele Riario’s palace, to which the church is inextricably connected and which later became the headquarters of the papal chancellery.

But its story did not end there: richly adorned with works of art, in 1798 it was used as stables for Napoleon’s French army and seriously damaged. It was then restored by Giuseppe Valadier in 1807 and 1816-1820 with a quite radical intervention that eliminated the confessio made by Gian Lorenzo Bernini, who had been commissioned by Cardinal Francesco Barberini to re-fit the church’s sanctuary in 1640. Further restorations were carried out in 1868 by Virginio Vespignani who gave the church its previous Renaissance forms, almost completely destroying the subsequent interventions. The church thus assumed its present appearance, with the exception of the wooden ceiling, which was rebuilt following the fire of 31 December 1939.

The entrance portal was built by Vignola for Cardinal Alessandro Farnese in the mid-16th century. The plan of the church is basilical with a nave and aisles, preceded by a two-bay narthex which houses, among other things, the memorial of Alessandro Valtrini, built in 1639 on a design by Gian Lorenzo Bernini, a statue by Stefano Maderno and a chapel designed by Nicola Salvi, the sculptor of the Trevi Fountain. In the right-hand aisle, the wooden crucifix over the Chapel of the Crucifix’s altar is medieval, late 14th century, and St Bridget of Sweden is known to have prayed before it. Further on, there is the 19th-century chapel of the Sacred Heart, with the monument to Pellegrino Rossi, the prime minister of Pius IX who was assassinated on 15 November 1848 on the grand staircase of the building. In the left-hand aisle, the altarpiece of the chapel of the Sacrament is an old icon of Our Lady, also known as the Madonna di Grottapinta: the icon is late 12th century and was in the lost church of San Salvatore ad Arcum. The apse, rebuilt in the 19th century, preserves the oil altarpiece by Federico Zuccari depicting the Coronation of Our Lady in Heaven with saints.