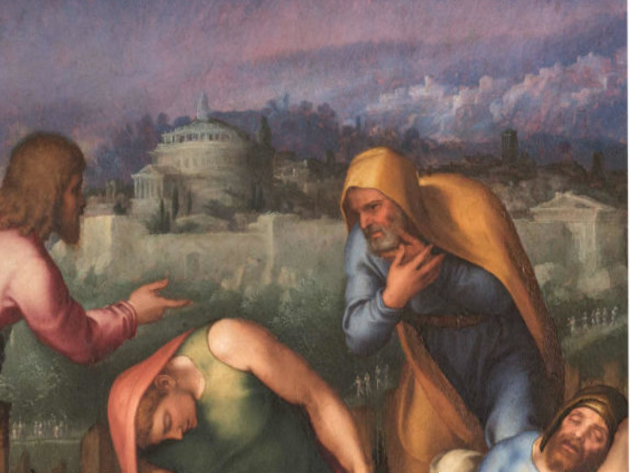 Palazzo Barberini hosts a new exhibition which highlights the close artistic bond established between Michelangelo Buonarroti (1475-1564) and the followers, comparing some of his drawings displayed in faithful reproductions, with the canvases and tables that were drawn in following years by artists linked to the Master.

Therefore, in the exhibition itinerary, visitors can admire a double representation of subjects dear to Buonarroti.

The great Tuscan painter and sculptor, who represents the highest expression of the Renaissance in art, is strongly influenced both by classical statuary especially of the Hellenistic period, and by Tuscan artists such as Giotto, Masaccio and Donatello. In his works we find the plastic representation of the human body characterized by an almost "twisted" movement for which they are universally known.
These aspects also emerge in the sacred subjects, taken up by the Mannerist painters in the exhibition.

Among the paintings, stands out the Annunciation by Lelio Orsi, arrived in Rome from the Gonzaga Museum of Novellara, for a long time attributed to Marcello Venusti. The table is placed side by side with the Annunciation of the Venusti of the Corsini Gallery reproducing faithfully the lost altarpiece that the artist had painted on a drawing by Michelangelo for the Cesi chapel of Santa Maria della Pace’s church.

One of the central themes of the exhibition is, for example, that of the Crucifixion. In particular, the composition of Venusti is inspired by three important drawings by Michelangelo: the living Christ on the cross, today in the British Museum in London, conceived for his friend Marchesa Vittoria Colonna, and the two designs full of spirituality depicting the Madonna and Saint John grieving at the foot of the cross, kept at the Louvre Museum in Paris.
The Venusti paints different variations of the latter subject, enriching them from time to time with different details, always inspired by the models of Buonarroti. The present example at Palazzo Barberini comes from a private Roman collection and is characterized by the addition of the Magdalene at the foot of the cross.

The exhibition ends with the theme of the Deposition illustrated by a little-known canvas by Marcello Venusti kept in the deposits of the National Academy of San Luca, next to the great Deposition by Jacopino del Conte of the Barberini collection: two Renaissance masterpieces restored for the occasion, inspired  also by the genius of the great Tuscan master.