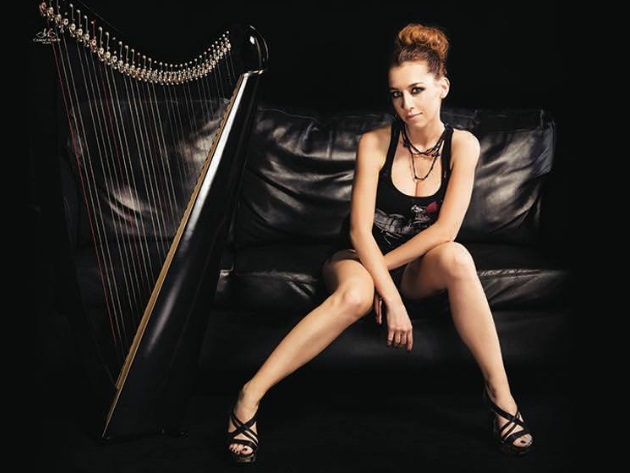 What do legendary groups and soloists like Led Zeppelin, Nirvana, Genesis, David Bowie, Pink Floyd, Bruce Springsteen, Coldplay and Avicii have in common? An artist and an instrument: Micol and her harp.

Micol, born Micol Picchioni, is a sui generis harpist who invented a new way of playing. She wrested her harp from an already written destiny, that of concert halls and classical music, and brought it to the arenas to play the songs that made rock history and arranging them in an original and personal way.

She is the only rock harpist on the international scene, and her concerts are real performances because Micol doesn't just play, she stands in front of her audience and accompanies her music with the overwhelming energy of her body.

After studying in Genoa, she graduated from the Morlacchi Conservatory in Perugia and began her concert career with world-famous directors such as Riccardo Muti.

But it’s not enough for her, she wants more, she wants to bring her rock and pop arrangements to the general public and so she and her harp begin to perform in the most beautiful squares in Italy.

Over time, her dream begins to become real. She is invited to open the concerts of PFM, Goran Bregovic, Gegè Telesforo, Chiara Civello, Angelo Branduardi and Edoardo Bennato, and world-famous festivals like that of Rio de Janeiro.

Now famous all over the world, Micol and her band are waiting for you at the Auditorium Parco della Musica to present Play, the new album: 12 tracks, including 6 reinterpretations of pop and rock dance hits, and 6 unpublished works by the artist as a composer for the first time.