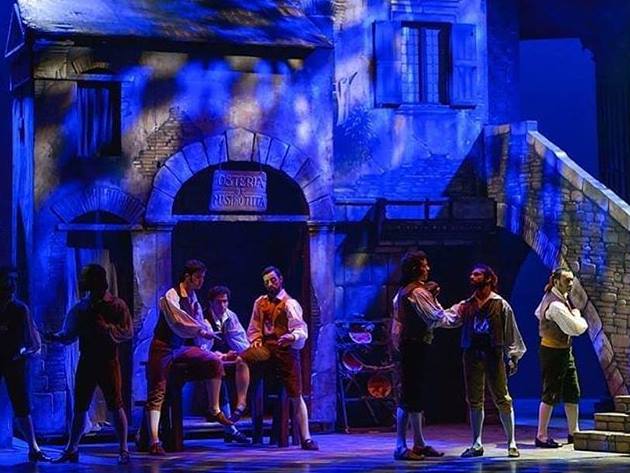 Taverns, palaces, remains, churches, alleys, squares, cats, the Tiber and beautiful women: those are the symbols of the papal Rome of the 19th century in Rugantino, the most popular musical comedy of the Italian tradition, which returns to the stage at Teatro Sistina in the original historical setting of 1978.

Created by Garinei and Giovannini, Massimo Franciosa and Pasquale Festa Campanile, the history of the famous Roman character reconstructs the Rome of Royal Pope, a little light-hearted, a little coward and a little bold, between love and jealousy, chatter and knives, revolutionaries to the guillotine, nobles and commoners.

The young and braggart Rugantino bets with friends that he will be able to conquer the beautiful Rosetta, wife of the very jealous Gnecco. After having achieved his goal, he ends up falling in love with the woman. Gnecco is murdered: Rugantino accuses himself because he doesn't want to lose Rosetta, who discovered the history of the bet. Going up to the gallows, to be beheaded by Mastro Titta, Rugantino faces death and finally proves to be a real man.

The exceptional cast sees the return of Serena Autieri and Michele La Ginestra in the roles of Rosetta and Rugantino, while Antonello Fassari and Edy Angelillo perform Mastro Titta and Eusebia, with the original scenes and costumes by Giulio Coltellacci and the splendid music by Armando Trovajoli, including unforgettable songs like Roma nun fa' la stupida stasera, Ciummachella and Tirollallero.

Rugantino marks an unmissable return to the origins: fun, feelings, irony and emotions, for a show, part of the soul and the cultural heritage of the city, which revives a page of Roman theatre history.