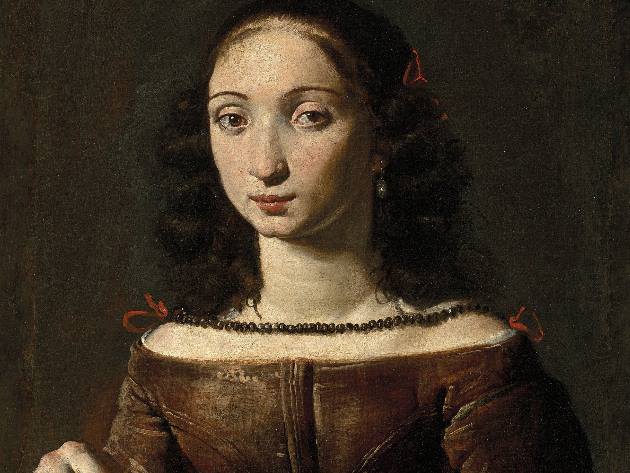 On the occasion of the reopening to the public of the Corsini Gallery, the National Galleries of Ancient Art present the first solo exhibition dedicated to the 17th-century artist, painter and first female architect in Western history.

Following her father footsteps, Plautilla acquired her artistic talent in the workshop of Giovanni Bricci - a pupil of Cavalier d'Arpino and musician, composer, poet and playwright. Her father offered her the first network of contacts and commissions, as happened with the Madonna and Child of Santa Maria in Montesanto (around 1640). On the back of the canvas is the signature of the very young Plautilla and a report declaring that the painting was completed by the Virgin herself.
This first work, the miraculous event and Plautilla's sincere devotion ensured her the production of numerous sacred images. She also got in touch with Abbot Elpidio Benedetti, curator of interests between France and Rome. Patron and future client of the artist, Benedetti was in a close relationship with some of the most famous masters of the time. Among these, on display, Gian Lorenzo Bernini, with a magnificent terracotta bust of Pope Alexander VII, Pietro da Cortona, with the splendid Portrait of Cardinal Giulio Mazzarino, presented to the public for the first time, and Giovan Francesco Romanelli, author of the Madonna del Rosario, from the church of Santi Domenico e Sisto, restored for the occasion.

Defined "architectura et pictura celebris" and a member of the Academy of San Luca, Plautilla occupied a central role in the artistic life of Baroque Rome. She established herself as an "architettrice", a term coined specifically for her extraordinary dedication in a field usually reserved for men. Villa Benedetta outside Porta San Pancrazio represents the masterpiece of her architectural design work. It was built starting in 1662-1663 and destroyed in 1849 during the French siege of Rome. Known as "Il Vascello", the villa is the testimony of a woman's silent revolution that has profoundly marked the history of art. Plautilla directed the workers, although artists such as Bernini, Cortona and Grimaldi had taken part in the construction site.

The exhibition, curated by Yuri Primarosa, winds through six sections and collects the artist's entire graphic and pictorial production, including a Portrait of an architect (likely effigy of Bricci) and original documents on her life, flanked by unreleased or little known masterpieces - paintings, engravings, projects, terracottas, etchings, objects and watercolours - of the closest masters to her, including Carlo Maratti, Artemisia Gentileschi, Giuseppe Vasi and Pietro da Cortona.

On display an ambitious project for the Spanish Steps (1660), the vast lunette painted for the Lateran Canons (1669-1673), the Standard of the Compagnia della Misericordia depicting the birth and martyrdom of the Baptist (1675), the Madonna of Rosario (1683-1687), two canvases preserved in Poggio Mirteto, restored for the occasion, the first certain works and the private chapel altarpiece by Andrea Benedetti, a papal embroiderer. The exhibition closes with the extraordinary loan of St. Louis IX of France between History and Faith, an altar painting realised by Bricci for the chapel of San Luigi (1676-1680) in the church of San Luigi dei Francesi, entirely designed by the architect for the abbot Benedetti.

The exhibition is accompanied by a catalogue (published by Officina Libraria), with essays by Yuri Primarosa and Melania Mazzucco, author of the book L'architettrice, and the contributions of some academics, experts of the artist and her cultural context: Aloisio Antinori, Carla Benocci, Maria Barbara Guerrieri Borsoi, Riccardo Gandolfi, Gianni Papi and Magda Tassinari.