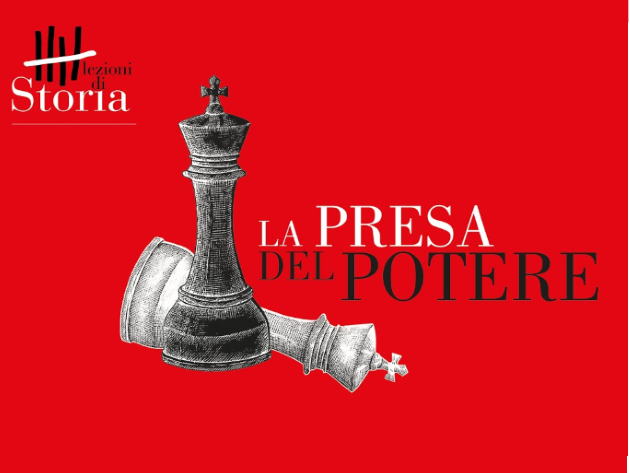 There are different ways to rise to power: through violence or persuasion, in the name of an ideal or by family descent, in a day or over more years. The Lezioni di Storia 2021 edition –  a project conceived by Editori Laterza with the Musica per Roma Foundation – will retrace the decisive moments in which the protagonists of history came to the government, traveling through the centuries and latitudes.

History will thus be once again under the spotlight but in a new way: the cycle of events will be entirely broadcast online on the Auditorium Plus platform, on Sundays at 6 pm, and will take advantage of the collaboration of ten important Italian theaters, each of which hosts a different lesson in a succession of stories, twists, emotions. The lessons will be available online until 30 June.

Program
7 March, Teatro Carcano in Milan, lecture by Laura Pepe “Zeus conquering Olympus”: the origins of the cosmos, gods and living beings through the long struggles of Zeus to reach the throne of the gods
14 March, Auditorium Parco Della Musica in Rome, lecture by Andrea Carandini “Agrippina”: the life of an ambitious and manipulative woman who used men to obtain power
21 March, Teatro Regio in Turin, lecture by Alessandro Barbero “Guelphs and Ghibellines, an Italian civil war”: the coup d'état of 1301 that brought the black Guelphs to power, also determining Dante's exile from Florence
28 March, Teatro Grande in Brescia, lecture by Alessandro Vanoli “Mohammed II and the siege of Constantinople”: the conquest of Constantinople by the Ottoman Turks who in 1453 put an end to the Eastern Roman Empire
11 April, Teatro Bellini in Naples, lecture by Luigi Mascilli Migliorini “Cortés and Montezuma”: the adventure of the Spaniard who conquered Mexico by wiping out the Aztec empire
18 April, Teatro Petruzzelli in Bari, lecture by Luciano Canfora “The Jacobin revolution”: the beginning of the Jacobin dictatorship and the Great Terror, up to the coup d’etat of 9 Thermidor
25 April, Teatro Verdi in Florence, lecture by Alberto Mario Banti “The Roman Republic, dream and reality”: the Rome insurrection in 1848 which briefly brought the republicans to power
2 May, Teatro Verdi in Padua, lesson by Guido Samarani “From the long march to communist hegemony”: Mao Zedong’s rise to power
9 May, Arena del Sole in Bologna, lecture by Marcella Emiliani “Gamal Abdel Nasser”: the rise to power of a central figure in contemporary Middle Eastern history
16 May, Teatro Storchi in Modena, lecture by Loris Zanatta “Fidel Castro and the Cuban revolution”: the landing on the coasts of Cuba and the beginning of an adventure transformed into legend by its protagonists